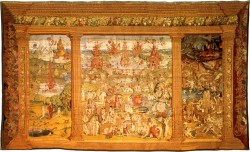 Kurz briefly discusses four tapestries, of which the designs – definitely in one case, probably in the other three cases – were borrowed from Bosch. The titles of these tapestries are: The Garden of Delights, The Haywain, The Feast of St. Martin and The Temptation of St. Anthony.

These four tapestries appear for the first time in the Spanish Royal Collection under Philip IV. It is highly probable that they were made for the Duke of Alba in the sixteenth century after similar tapestries that were owned by Cardinal Granvelle. From documents can be deduced that the original Garden of Delights triptych was owned by William of Orange in those days, until Alba confiscated the painting together with other possessions of William.

The tapestries were moved from the Royal Collection to the Patrimonio Nacional and hung in the palace of La Granja for some time. According to Kurz they are no longer there: all his attempts to find out about their present location were a failure.

Today the tapestries’ location is the Patrimonio Nacional in Madrid.