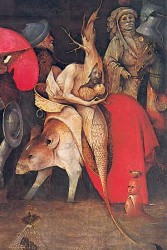 In this contribution to the 1996 annual of the Antwerp Royal Museum of Fine Arts the author discusses some depictions of witches from the seventeenth-century Netherlands. Among them works by David Teniers the Younger, Frans Francken the Younger, David Ryckaert III, Charles Emmanuel Biset, Jacques de Gheyn II, Cornelis Saftleven, Leonaert Bramer and Jan van de Velde II. Because a lot of motifs in the seventeenth-century representations of witches from the Netherlands can be traced back to the work of Bosch and Bruegel, Lucas first offers a brief discussion of Bosch’s St. Anthony triptych (Lisbon) and of the print St. James and the Magician Hermogenes which is based on a drawing by Bruegel.

According to Lucas Bosch has never depicted witches in the true sense, but in his scenes about the temptations of St. Anthony we can see female seductresses, representing the capital sin of luxury, among all sorts of diabolical creatures [p. 93]. In the rest of her article Lucas mentions a number of motifs in the seventeenth-century depictions of witches discussed by her, which show similarities to motifs from the works of Bosch. These influences are the following.

When representing monsters Teniers stays closer to Bosch’s and Bruegel’s pictorial language than Francken. Francken’s witch scenes have more sinister details [p. 121]. Bosch’s and Bruegel’s monsters are often a combination of loose parts, sometimes resulting in a comical effect. With Ryckaert we see devils built up as a whole, which makes them more realistic [p. 124].