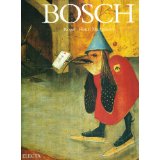 In 1987 Marijnissen published Bosch: het volledig oeuvre (Hieronymus Bosch: The Complete Works), a beautiful work of reference which was translated into French, English, German, Japanese and Russian. This new publication is aimed at a more general public than the preceding one. It has less text and fewer illustrations, making it a lot cheaper, but this does not mean it is uninteresting.

In the past Bosch’s paintings have resulted in a hardly surveyable mass of books and articles, unfortunately often of mediocre scholarly quality. In the first part of Bosch Marijnissen pleads in favour of a cultural-historical approach of Bosch’s oeuvre: the painter’s works can only be understood ‘by means of elaborate research focusing on the late-medieval culture of the Netherlands’. Marijnissen points out that the major part of Bosch’s remnant work consists of triptychs (or what is left of them) and that they functioned as devotional objects within the Roman-Catholic cult. When Marijnissen discusses the individual panels it becomes clear that Bosch’s final message perfectly fits in with the late-medieval Christian context: he permanently warns of sin and folly and propagates the pious imitation of Christ and the saints, aimed at a blissful existence in the Hereafter. Apart from the introductory text the larger part of this book contains a series of high-quality colour illustrations, with a variety of overall pictures and (often very intriguing) details. Every individual work is accompanied by additional comments and further literature.

For those who thought Marijnissen’s preceding Bosch book was too large or too expensive, this publication offers a nice and reliable opportunity to get more familiar with the imagery of a painter whose works are admired and studied from Japan to the US and from Sweden to South Africa.