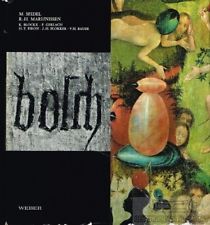 The main objective of this book was not to offer new insights but rather to deliver a critical survey of Bosch scholarship, thus contributing to further research. Here, Bosch is approached from different disciplines although this has not resulted in an interdisciplinary study and the authors have definitely not tried to harmonize their conclusions. Marijnissen and Gerlach (see also Gerlach 1972) interpret Bosch from an art-historical perspective, but their conclusions about the Garden of Delights are mutually exclusive. Blockx (see also Blockx 1972) writes about Bosch’s religious context, Piron (see also Piron 1972) discusses the psychoanalytical interpretations, Plokker (see also Plokker 1972) offers a psychological approach and finally Bauer (see also Bauer 1972) focuses on the St Anthony’s fire phenomenon in the art of Bosch. This publication is limited to the three major Bosch triptychs: The Haywain (Madrid), The Garden of Delights (Madrid) and The Temptations of St Anthony (Lisbon). A second part with a discussion of the other paintings is promised, but would only be published in 1987.

Marijnissen applies the method of historical criticism. He strongly emphasizes the fact that the three works under discussion are triptychs and triptychs were always expressions of ecclesiastical art, produced for a patron (altarpieces). According to Marijnissen the content of the three triptychs is indeed religious (man is being admonished, disapproval of all earthly vanities) and the subjects were probably imposed by a patron. Bosch is a moralist (as father Siguença already wrote in 1605) and the study of his Brabantine environment is important for a correct understanding of his oeuvre. Scholars who plead for this deserve more attention than they have received so far. Sometimes Marijnissen seems to tend towards the method of non-interpretability: for some paintings or scenes the art-historical methods are not yet able to suggest a convincing explanation.

Last but not least this book has become a wonderful source of viewing pleasure thanks to Max Seidel’s photographs, often very detailed and therefore twice as interesting. The criticism that in this way parts of the paintings are crudely ripped from their context is unfair: Bosch’s paintings ask for such a detailed study. Because of these nice illustrations and because of the textual department (including an extensive bibliography up to 1972) this publication is a standard work of reference, offering the reader not only a state of affairs regarding Bosch scholarship at the outset of the nineteen-seventies but also a number of desiderata for future research (the link between Bosch and Lucas Cranach, the Brabantine context, the landscape in the art of Bosch…). Most authors in this book agree that Bosch was a moralizing painter and a child of his times. In the present state of affairs we are not able to explain every detail, but then again: not everything that Bosch painted is enigmatic! This book was also published in French, English and German versions.