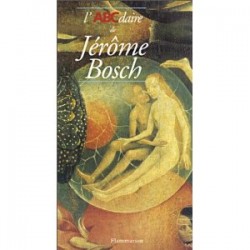 Within the literature about Bosch the name of Roger-Henri Marijnissen is widely and internationally known, not in the least thanks to the Bosch monograph he published together with Peter Ruyffelaere in 1987 and that has been translated in some five world languages (i.a. Russian). Hieronymus Bosch – The Complete Works was and is a standard work of reference, not only because of the numerous wonderful colour illustrations of details, but also because of the well-thought-out and at the same time relativizing, witty approach to Bosch it offers. In 2001 Amsterdam University Press published a reprint of this essential Bosch book, the only minor point of criticism being that the (nevertheless impressive) bibliography was not completed with the Bosch titles that were published àfter 1987.

At the request of the Paris publishing-company Flammarion Marijnissen and Ruyffelaere also wrote a more modest monograph in 2001, intended for a wide, French-speaking reading public (resulting in the quotation of quite some late-medieval French texts: see i.a. pp. 24, 37, 39, 54, 55, 56, 74). L’ABCdaire de Jérôme Bosch offers a general introduction and a long list of alphabetically ordered headwords, together making up a kind of compilation of the most important insights and ideas from Marijnissen’s earlier Bosch books and articles (Ruyffelaere being responsible for the numerous, well-chosen illustrations that without exception support the argument in a direct and very functional way).

This inevitably results in quite a lot of repetition because a lot of things from earlier publications recur in this new monograph: the central panel of the Garden of Delights (filled with eroticism) is situated between Eden and Hell and so can only refer to sin (Luxury) [p. 10], the pivotal scene of the opened Lisbon St. Anthony triptych is Christ standing next to an altar with crucifix [p. 15], some scholars consider the head of the so-called Tree-man (right interior panel of the Garden of Delights) a selfportrait whereas Tolnay saw a geiler Idiotenkopf in it [p. 26], in the opening of the blue ball in the central panel of the Garden Bosch depicted the two forms of unchastity (heterosexual and homosexual) [p. 27], the hoopoo in the same central panel is compared to texts by Ruusbroec and Bartholomeus Anglicus and to a passage in the Compost et Kalendrier des Bergers [p. 68], the thorny stick in the central panel of the St. Anthony triptych is the attribute of a bailiff [p. 70] and the sleeping fox in the Ghent St. Hieronymus panel is explained with the help of a sixteenth-century sermon by Jan van Paschen [p. 90].

Of course, this will not disturb those who have not read Marijnissen’s earlier Bosch texts and it is also very understandable that Marijnissen’s basic approach to Bosch has not changed after all these years. The author explicitly uses a cultural-historical method, boiling down to the insight that we have to look for the original function of Bosch’s paintings and for the message they propagated 500 years ago [p. 8]. According to Marijnissen the Bosch oeuvre essentially consists of triptychs and these functioned as altarpieces and were the result of a commission in most cases [pp. 22-23], the patrons being well-to-do burghers or clerics who belonged to the bourgeoisie [p. 27]. That in this respect the Last Judgment commissioned by Philip the Fair in 1504 is supposed to be an exception [p. 27] is not completely correct, though: the Garden of Delights was also painted for a noble patron (Engelbert II of Nassau or Henry III of Nassau).

The content of the Bosch oeuvre is essentially religious [pp. 47 / 59! / 88 / 105] and moralizing [p. 28] and boils down to a pessimistic view of man that rather belongs to the Middle Ages than to Humanism [pp. 81/65]. Bosch’s basical message deals with rejecting sinful earthly vanities (the contemptus mundi), being on the alert for the wiles of the devil and focusing on a blissful final destination in the hereafter [p. 19]. In order to properly understand the symbolical form of this message, contemporary texts are essential [p. 108], mainly Middle Dutch ones [p. 71] but also Latin ones (which have not  sufficiently been studied yet) [p. 72].

To introduce his approach of Bosch to the reader in an adequate way Marijnissen uses an extremely fluent and often almost aphoristic style, which also in French sporadically leads to witty formulations such as la piété fait pitié (when he writes about piety that is over the hill today) [p. 35]. A disadvantage of this attractive verbal competence is that Marijnissen’s argument is sometimes a bit vague and superficial, especially when he interprets certain details: evil is already present in the Eden of the Garden of Delights (where exactly, the reader wonders) [p. 11], man is indulging in unchastity in the central panel of this triptych (why not more detailed examples?) [pp. 11/47], hay symbolism is pivotal in the central panel of the Haywain (only Isaiah is being referred to) [p. 13], the pedlar in the exterior panels of the Haywain represents mankind and is said to be a pilgrim of life (but how about all the other things that can be seen in these panels?) [pp. 13-14].

Very occasionally the author even offers a debatable interpretation of certain details, for example when he explains the devil with an arrow in his anus in the right interior wing of the Garden by means of the expression menich maect een roede tot sijn selfs eers (translated as: souvent les gens se taillent une verge pour la mettre dans le cul), meaning that people are often the cause of their own punishment [p. 86]. A stick or a branch (roede / verge) is not the same as an arrow, and furthermore the Middle Dutch expression does not mean that someone puts a stick or a branch in his anus, but that this person hits his bottom (or has his bottom hit) with a stick or a branch. To us it seems that the arrow in this detail can more conveniently be linked to the Middle Dutch phrase ruggebout, which means ‘turd’, but at the same time also literally ‘back arrow’.

Quite interesting are the pages in which Marijnissen sums up a number of desiderata for future research, presenting himself so to speak as the conscience of twentyfirst-century Bosch exegesis. The need of a dendrochronological study [p. 116] has meanwhile largely been met by Peter Klein, within the context of the Rotterdam Bosch Exhibition (2001), but the scientific analysis of all Bosch drawings [p. 34] and all Bosch signatures [p. 96], the further study of Bosch iconography with the help of specialized botanists and ornithologists [p. 109], the closer analysis of Bosch’s style and technique [p. 111] and an expansive study about late-medieval triptychs [p. 112], each of these are aspects of Bosch scholarship largely waiting for execution in the near future.

It is also worth noticing that in many places and between the lines Marijnissen criticizes Paul Vandenbroeck, without mentioning his name even once (except in the bibliography). The controversy Marijnissen-Vandenbroeck goes back to 1987 in which year both authors published a Bosch monograph, after which they both delivered a very sharp review of each other’s work (Marijnissen in De Standaard der Letteren and Vandenbroeck in Bijdragen tot de Geschiedenis). Vandenbroeck questioned Marijnissen’s thesis that the Bosch oeuvre is basically religious: this oeuvre mainly consists of triptychs and according to Marijnissen triptychs functioned as devotional objects in the late-medieval Netherlands, more precisely as altarpieces. In his 2001 book [pp. 15 and 113] Marijnissen again and explicitly suggests that he does not know any triptychs with a profane function from the period around 1500, except for one exception: a heraldic triptych of very small size. In the past Vandenbroeck has signalled more than once other late-medieval profane triptychs (among them Van Eycks Marriage of Arnolfini and the Double Portrait of the Master of Frankfurt: both were originally the central panel of a triptych) and furthermore he rebukes Marijnissen for not taking into account lost Bosch works that we only know from copies or old inventories. Vandenbroeck’s frequent referring to lost Bosch works is of course a weak point in his argument for how can we be sure that certain works from the school of Bosch indeed go back to a Bosch original and that the authors of sixteenth-century inventories were really capable of seeing the difference between a Bosch original and an imitation?

Meanwhile this controversy has been carried on for years and in this publication it is continued by Marijnissen (implicitly but easy to detect by the well-informed reader). On page 15 one can find an example of this but it is even more manifest on page 28 where we are informed that only a neo-marxist approach of Bosch is capable of discerning a non-religious ideology behind his work. Furthermore we read that scholarly publications often follow an erroneous train of thought [p. 8], that the patrons depicted by Bosch don’t suggest a profane character of the paintings they commissioned [p. 41], that Bosch’s known triptychs always deal with Christian eschatology [pp. 48-49] and that triptychs of moderate size had another function than those of Bosch (which were meant as altarpieces) [p. 113].

Although it is hard to deny that the basic content of the generally accepted authentic Bosch oeuvre that has come down to us is indeed essentially religious, panels such as The Conjuror and The Cutting of the Stone (whose authenticity is not generally accepted!) seem to suggest that sometimes Bosch did produce paintings with a profane main theme, which is confirmed by the obvious presence of profane motifs within Bosch’s religious triptychs (for example the eroticism in the central panel of the Garden of Delights). But Vandenbroeck too easily supposes that without exception sixteenth-century paintings in the style of Bosch can be traced back to original designs of the master and that every sixteenth-century author of inventories had a sound and clear view on the issue of authenticity that is presented by the Bosch oeuvre.