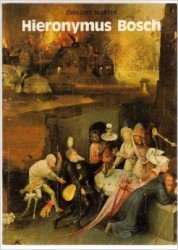 Bosch painted in oil what the early Dutch miniaturists had already depicted. Bosch played an important role in the development of genre painting in the Netherlands and in the development of landscape painting. But his real fame is based on the visionary nature of his art and on his extraordinary powers of imagination, in short on his doom pictures. Bosch’s active membership of the Fraternity of Our Lady proves his orthodoxy and his religious zeal. He was also influenced by the Brethren of the Common Life, a movement which was inspired by the Modern Devotion. A scholarly man such as Bosch must have been inspired a lot by the Brethren or by their school which was the main educational center in ’s-Hertogenbosch.

When Martin discusses Bosch’s paintings he doesn’t break fresh ground, everything remains rather superficial. But whereas he admits that for the Rotterdam Wedding at Cana no proper explanation has been given yet, he turns to astrology when writing about the Garden of Delights.

According to Martin the true meaning of this tryptich has recently been discovered with the help of astrology and alchemy. He writes that the tryptich was painted in 1504, the year in which there was a conjunction of the planets Sol and Luna in the House of Cancer. The main theme of the Garden of Delights is precisely this astrological phenomenon and its connotations. There was a long tradition of mystical associations between astrological ideas and Christianity. Ruusbroec, the spiritual founder of the Brethren of the Common Life, was part of that tradition. On the left inner wing the pink fountain is the astrological symbol of the Crab, the emblem of the sign of Cancer. At its top we see a crescent moon, sign of the planet Luna, and at its bottom a round hole, sign of the planet Sol: Sol and Luna and their conjunction in Cancer. The left wing represents the marriage of Christ, as second Adam, with Eve as Ecclesia (the Church), a union which in the late Middle Ages could be represented by the conjunction of Moon and Sun (the Church and Christ) in the sign of Cancer.

On the central panel we see the Paradise of Ecclesia, populated by the Children of Venus who were associated with Eve by Bosch’s contemporaries. The blue ball in the water is a symbol of the astrological Moon. Everything is in harmony under the influence of Venus and Luna, the planets of love and motherhood. The water with the bathing women is the Pond of Venus, the animals around it are symbols of the planets and their constellations. Here Bosch celebrates the triumph of love under the auspices of the planets Venus and Luna. The right inner wings shows the negative influences of Luna and Venus. In the middle we see the Treeman. Bosch also made a drawing of this motif and in that drawing the Treeman’s structure is based on symbols of Luna (bats, trees and eggs). On the right wing we also see musicians who are being punished: the planet Venus protected music and musicians.