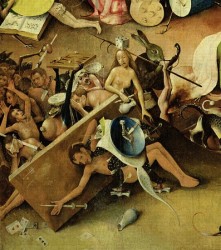 Mateo briefly writes a number of things about the group of people visiting inns and brothels (which she calls ‘the group of players’) on the right inner wing of the Garden of Delights. According to her this group not only refers to Avarice associated with gambling, but also to Wrath (see the weapons that are being used by the group). In this context Mateo quotes a relevant passage from Erasmus’ Praise of Folly. She also discusses the hunting ‘rabbit’ (sic: it is a hare, actually) and the woman with a giant die on her head who is holding a pitcher and a candle in her hand: she interprets these details as symbols of Unchastity.

Mateo refers to an engraving by Peter Baltens in which a bride is also holding a pitcher and a candle. In a book about (French) folklore, written by A. van Gennep, Mateo has read that the jarro (pitcher) has something to do with marriage customs and refers to sexual intercourse. The same goes for the candle. With Baltens and with Bosch the pitcher and the candle thus refer to marriage customs. Mateo interprets the woman with the giant die as the goddess of chance who marries the hunter, the player and the visitor of inns. This would fit in with the group of gamblers, because these are persons who can’t foresee the consequences of their deeds, depending as they are on chance.

This interpretation is not very convincing. Peter Baltens did not depict a pitcher and a candle, but a chamber-pot and a candle. Chamber-pot and candle can indeed be associated with what Mateo read in the book about French folklore. For more iconographical examples of a chamber-pot and a candle in a marital context, see De Bruyn/Op de Beek 2003: 108-113 / 128-131. Bosch on the other hand painted a pitcher and a candle and these are attributes of a prostitute. The woman with the giant die can hardly be the goddess of chance (where would Bosch have got the idea?) but she is a prostitute who is being punished in hell. The die on her head may be referring to a Middle Dutch pun: ‘dobbele vrouwe’ (= deceptive woman, ‘dobbelsteen’ meaning die, and ‘dobbel’ also meaning deceptive, false).

The detail from the Garden of Delights discussed by Mateo does refer to Unchastity, but apparently not in the way Mateo explains in this article. Obviously this detail also refers to games of chance which often lead to quarelling and fighting, but much more about this can be said than is done by Mateo.