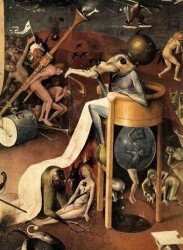 In spite of the title this article is not about the punishment of gamblers on the right inner wing of the Garden of Delights. Mateo does refer to an article with the same title in Archivo Español de Arte (see Mateo 1959) which was published without photos. These photos are now published together with the current article.

In the rest of the article Mateo discusses the woman who is looking at herself in a mirror which is at the same time the behind of a devil, the devil in a giant potty-chair who is devouring sinners and the sinner on a bed who is surrounded by witchy women, all on the same right inner wing. Mateo thinks that in these scenes, which belong together, the sin of Unchastity is being punished. The devil in the potty-chair can be associated with Unchastity because of the pitchers at his feet and because of a passage in the Visio Sancti Pauli in which we can read that unchaste sinners are being cast into a pit by a supervising devil. The element that links the woman to the left of the potty-chair and the man on the bed to the right is the toad, a symbol of Unchastity. Because the man to the right is lying on the bed alone, he probably is a homosexual.

Mateo also mentions a fragment of a twelfth-century Last Judgement and a detail from a panel by Colijn de Coter (XVB), where we can also see a toad on the chest of a female sinner (see Mateo’s illustration II).