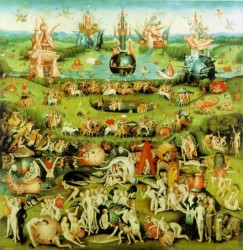 In the Spanish Royal Collections there was once a second Garden of Delights triptych. In 1776 Ponz signalled this triptych in the Casa de Campo in Madrid, with the comment that the painting was in excellent shape. In the Escorial Ponz also saw the triptych that is in the Prado today, and he reported that it was in bad shape. In this article Mateo Gomez investigates whether the Earthly Paradise panel that is in the Escorial today was once the left interior wing of this second Garden of Delights triptych.

Everything seems to point out that this was indeed the case. The inventory of the Palacio Real in Madrid of 1636 signals a Garden of Delights triptych that was dismantled at that moment (the three panels having been taken apart). Most likely the central panel disappeared from the Casa de Campo during the Napoleontic Wars. The left wing was preserved, but where have the central panel and the right wing gone? Mateo Gomez thinks that she has been able to locate the central panel: the Count de Pomereu in Paris owns a copy of the cental panel of the Garden of Delights, the dimensions of which match those of the left wing in the Escorial. The details of this Paris panel completely correspond to those of the Garden of Delights tapestry that is in Madrid today, and furthermore the details in which this tapestry differs from the original central panel in the Prado can also be found in the Paris panel.

Mateo Gomez believes that the second Garden of Delights triptych (of which the left wing survives in the Escorial and the central panel in Paris) is a copy of the original triptych and that it was meant to function as an example when the tapestry was executed. She suggests that this copy may have been painted by Michiel Cocxie for Philip II in the second half of the sixteenth century.

This article only offers hypotheses, but they sound quite convincing. The Paris copy of the central panel is in a private collection in Brussels today.