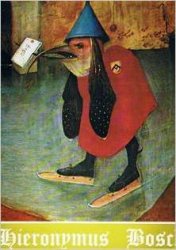 Merten’s approach of Bosch is characterized by Mehrdeutigkeit (poly-interpretability). He pays a lot of attention to the symbolical dimension of Bosch’s work. This symbolical dimension is the reason why we understand this oeuvre so poorly: we no longer possess the intuitive common knowledge of symbols which was widespread in the Middle Ages.

Although Bosch paints ‘sermons’ about good and evil (more about evil than about good) he must have had close ties with one or more occult movements. There is an esoteric factor in his work, but unfortunately we don’t understand it anymore. Merten remains cautious, though: Bosch was not necessarily a member of such movements, but he knew about them, which is something quite different.

This caution is also present in Merten’s interpretations of the paintings. In the case of the Rotterdam Wayfarer ‘it is supposed’ to be an astrological representation of Saturnian man. The demons in the Lisbon Temptations of St. Anthony ‘offer interesting perspectives from an astrological and alchemical point of view’. Form and composition of the Madrid Seven Deadly Sins ‘point at’ ancient and secret scientific knowledge. And in the case of the Madrid Garden of Delights it is impossible to decipher the occult symbolism of all the scenes. It is obvious, though, that the major part of the triptych depicts a peaceful situation of harmony in Paradise, whereas Hell – as a horrifying warning – seems to be of minor importance.