The Rest of Bosch's "Ship of Fools" 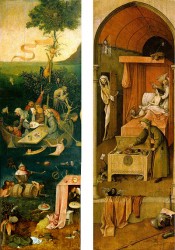 In 1961 Charles Seymour suggested that the Allegory of Gluttony panel (New Haven, Yale University Art Gallery) had once been the lower part of the Ship of Fools panel (Paris, Louvre) and that the two panels together had once been the wing of a triptych, its pendant being the Death of a Miser panel (Washington, National Gallery). By means of X-radiographs Morganstern now convincingly demonstrates that the two panels in Paris and New Haven have indeed once been parts of one tall panel that was cut in two and that only 4-8 mm were lost in the cutting [pp. 295-296].

Regarding the link with the Death of a Miser panel: the Louvre has two grisaille drawings (one corresponding with the Ship of Fools panel, the other with the Death of a Miser panel) that show so many similarities that they appear to be by the same hand. The executor of the drawings was not Bosch, though, but probably an imitator who copied two panels of a triptych. Morganstern suggests the Death of a Miser was the left exterior panel, and the Ship of Fools was the left interior panel. The iconography of both panels is said to support this hypothesis: the panels were probably part of a triptych dealing with the Seven Deadly Sins [pp. 298-302].