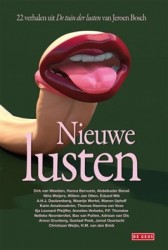 As part of Bosch500 (the memorial of Jheronimus Bosch’s decease 500 years ago) the Museum Of The Image (MOTI) in Breda (The Netherlands) organized an exhibition focusing on the Garden of Delights triptych from 2nd April until 31st December 2016. Four Dutch artists or joint artists familiar with computer animation were asked to create a work inspired by this triptych. So this was about digital animations (nowadays called appropriations) whose purport was to reinterpret and actualize Bosch’s painting.

Eelco Brand’s assignment was to ‘reanimate’ the exterior panels of the Garden of Delights. His The Birth of Landscape is an installation consisting of two parts: on the one hand a glass sphere behind which a film of a small island is being projected, on the other a side wings landscape. After Eden, created by Persijn Broersen and Margit Lukács and inspired by the left interior panel, is a film loop of fifteen minutes in which images from some 50 Hollywood movies are put together, focusing on the background landscapes and dispensing with the human figures. It is supposed to suggest the quest for paradise.

More interesting than these two projects and (in our opinion) the most successful part of the exhibition is Paradise, a computer animation by Studio Smack (a Breda film studio run by Ton Meijdam, Thom Snels and Béla Zsigmond) reinterpreting the Garden’s central panel. There are no literal pictorial quotes but the panel’s overall structure can easily be recognized. Bosch’s little figures have been replaced by loops of moving and spinning so-called avatar egos, supposed to represent how today’s people see themselves and intended to be a sarcastic mirror of contemporary society. Obviously, the sexual urge plays an important role here (see for example the men riding phallic animals and turning endlessly around a high phallic tower and a number of females, thus reminding the viewer of Bosch’s riders on animals who are circling around a pond with naked women). Floris Kaayk’s Hell.exe was inspired by the Hell wing (right interior panel) and is second best: by using games software and figures downloaded from a 3D-app and adapted in various ways it creates an aggressive atmosphere that reminds us of some computer games and results in something that is really gruesome and creepy.

On the occasion of this small exhibition and using the same name a book was published presenting 22 short stories by different authors, all inspired by Bosch’s Garden of Delights. The compiler, H.M. van den Brink, confronted the authors with a detail from the painting and asked them to give free rein to their imagination and write a short story starting from the detail. In the preface Van den Brink writes: ‘We did not ask them to actualize Bosch’s themes nor to interpret them historically but to associate freely and to elaborate on the scenes we offered them’. The black-and-white photos (without exception of poor quality but of course, this is not an art book) at the beginning of each story point out which scenes were meant to be the starting point.

Somewhat more aggravating, in my opinion, is that nine stories show no link with the Garden of Delights whatsoever. Weird, wasn’t that what we were all here for? In eleven other stories such a link can be discerned, but only with a lot of good will and with a magnifying glass. Only two stories remain that are undeniably referring to the Garden of Delights: De flashforward van Jeroen Bosch [Hieronymus Bosch’s flashforward] by Willem Jan Otten, but that is more like an essay than a short story and is almost completely filled with hazy mumbo jumbo (by the way, who is this Cseslaw Milósz who is introduced here by Otten as some sort of Bosch oracle?), and Cross by Bas van Putten. This text starts from the musical instruments in the Garden’s right interior panel and goes on to find similarities to Mahler’s music but shows exactly the same flaws as Otten’s story. On page 129 Van Putten writes: ‘Mahler became the composer whose highlights are the mutilated and abused visions of hell and heaven, between them the earth of the notes as the squashed filling of the abysmal sandwich we call life, spot on that Bosch scene’. Would anyone feel inclined to award a prize to a sentence like this?

Which brings us to the literary merits of this collection of short stories. Obviously, the reader’s personal preferences are always pivotal in the case of aesthetic assessment but this being said I think it is fair to conclude that the quality of more than half of the stories, twelve to be precise, is extremely poor. Five of them are even utterly below par, at least in my opinion (the numbers 5, 7, 13, 19 and 21). With some good will, two stories, Quetzalcoatl/Een besluit [Quetzalcoatl/A decision] by Manon Uphoff and Tropenarts [Tropical doctor] by Arnon Grunberg may be called solid. Six of the remaining eight stories are direct hits: Villa der Lusten [Villa of Delights] by Edzard Mik (some sort of nocturnal visions in a sex villa in which the blue sphere, the birds and the fruit in Bosch’s central panel play a part), Om haar te bezitten [In order to have her] by Karin Amatmoekrim (about a man who tries to seduce a black paintress, but a link with the Garden can hardly be spotted), Hunkering [Desire] by Nelleke Noordervliet (about a young widow and a priest preaching from the Witches’ Hammer in a medieval village, superficially referring to the Hell wing), Come together by Jamal Ouariachi (about a man and a woman who meet through a datingsite, the link: the die and the playing cards in the right interior panel), Terminaal telefoontje [Terminal call] by P.F. Thomèse (about a terminal Famous Dutchman who talks on the phone to a Flemish lady, no clear references to the Garden, though) and Imprimatura by H.M. van den Brink (about a house painter who makes a perverted use of white lead, no links apart from this white lead).

Reading Nieuwe lusten also results in two pleasant discoveries: the two assets of this collection. Het horizontale leven [The horizontal life] by A.H.J. Dautzenberg is a very original story: a lecture (with stage directions as in a script) delivered by a female student who has an attractive bottom and spends some philosophical thoughts on this in a bantering tone. Erotic, witty and imaginative, but unfortunately: no references to the Garden, at least no obvious ones. But the best story in the book is by far Blikschade [Bodywork damage] by Christiaan Weijts: a (married) man settles a collision by proposing sex to the blonde woman who drove the other car but when his wife forces him to revise his notification of the accident this leads to a nasty situation. Weijts’ starting point is the man being kissed by a nun-devil in the lower part of the Hell wing: unchastity leads to Hell! A well-constructed and intriguing story with a lot of functional details and nice descriptions (‘a smile as lights turning green’, referring to the accident that was caused by the blonde woman who thought the lights had already turned green).