Hieronymus Bosch and the >Visio Tnugdali< 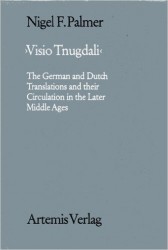 Palmer focuses on possible influences of the Vision of Tondal (an edition of which was printed in ’s-Hertogenbosch in 1484) on the art of Bosch. Only two motifs in the medieval text are remarkable enough to be mentioned.

The bird-devil on the potty-chair in the right interior panel of the Garden of Earthly Delights seems to be inspired by the punishment for monks and nuns in the vision: a monster with the beak of a bird devours souls and defecates them (this latter motif is called an ‘otherwise unparallelled idea’ by Palmer). The other details of this Bosch scene don’t fit in with what is described in the text. In a footnote Palmer interprets the figures under the chair as representations of gluttony and unchastity, and the bird-devil as Satan: the kettle, worn as a crown, signals that this monster is the prince of hell and Satan is often depicted as a devourer of souls.

In the past the helmeted figure riding an ox (or a cow?) in the lower right interior panel of the Haywain has already been related to the passage in which Tondal has to lead a wild cow across a bridge. In both cases there is indeed a bovine animal and a bridge, but with Bosch the bridge is completely different from the bridge in the text and the helmeted man does not lead the animal, but rides it. There are not enough parallels in order to conclude that Bosch was influenced by the text. What Bosch painted is more similar to the blind-folded figure holding a spear and riding an ox (an image of Death) in P. Michault’s La Dance aux Aveugles. The printed Middle Dutch translation of this text (1482) has a woodcut with Death riding an ox, and this visual source is very similar to what Bosch painted.

That in the early sixteenth century the Visio Tnugdali was associated with Bosch’s images of the Other World is proven by three inferior imitations that have the caption Visio Tondalij. But none of the scenes in these three paintings can be related to the text of the vision.

As is also the case in the rest of his dissertation, Palmer obviously has a profound knowledge of his subject matter (see also the very sound bibliography accompanying this part of his text) and his observations are keen and sharp-witted.