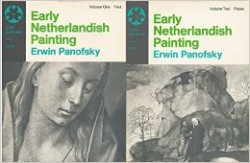 The art of Bosch is totally different from that of the Flemish Primitives. His source is the popular or semipopular art of woodcuts, engravings, carvings in wood or stone and, most important, book illumination. He was inspired by the International Style, by drolleries in fourteenth- and fifteenth-century manuscripts and by the réalisme pré-Eyckien. He must have been attracted by the illustrations in such allegorical treatises and poems as the Pèlerinage de la Vie Humaine.

Other sources named by Panofsky are religious literature (for example the Ars moriendi and the Visio Tundali), popular science, Jewish legends, folklore and proverbs and, above all: orthodox Christian theology. Panofsky rejects Fraenger’s theories: Bosch was definitely not a heretic. Perhaps he was one of those extreme moralists who were obsessed with what they fought so hard and who were in a way attracted by obscenities, perversions and tortures. ‘He may have been a case for psychoanalysis, but not for the Inquisition.’

Panofsky believes that Bosch has not yet been ‘deciphered’ and he does not think himself capable of doing so. He ends his text (and his book) with a quote from Adelphus Müelich: ‘This, too high for my wit, / I prefer to omit’.

Marijnissen (see Marijnissen et al. 1972: 11) called the quote a witticism and regretted that Panofsky did not occupy himself more with Bosch. According to Marijnissen the few paragraphs Panofsky devoted to Bosch are a proof of ‘soberminded judgment and real knowledge’. Panofsky could have dealt with a lot of the crap that has been written about Bosch.