Hieronymus Bosch and the Lisbon Temptation: a view from the third millennium 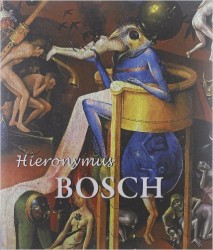 Pitts Rembert first offers a short and concise overview of the literature on Bosch until Fraenger. Then she writes no less than 37 pages about Fraenger’s approach of Bosch (Bosch painted for a heretical sect), only to conclude that Fraenger’s imagination is only rivalled by that of Bosch himself. Follows a concise overview of Bosch literature after Fraenger and an introduction of the author’s own interpretation of Bosch: she focuses on the irrational aspect of Bosch’s art, which cannot be understood in a rational way. Bosch wanted to paint the weird, unreal world of the devil in a form as realistic as possible and in doing so Bosch was acting according to subconscious directives that at the same time appealed to the viewer’s subconscious: that is why it is impossible to find a consistent, logical meaning in Bosch’s paintings. To give an example of this, Pitts Rembert will analyse the Lisbon St Anthony triptych but she will not be looking for hidden rational meanings: it suffices to consider Bosch’s imagery as ‘imaginative creation in its own right’.

In the Middle Ages, it was believed that the devil worked through heretical activity and occult practices and this inspired Bosch when he painted Evil. This is why, after a summary of St Anthony’s life according the vita by Athanasius, we are offered some sort of course on the essentials of witchcraft, sorcery, necromancy, Tarot, alchemy and astrology. When the author finally engages upon an analysis of the Lisbon triptych (which does figure strikingly in the subtitle after all), we are already at page 159. A good number of bad things can be said about this analysis: it is a confusing conglomerate of very vague references to the sources mentioned above, rarely adding to our understanding of the painting. The central idea of the triptych (believing in and looking for support with Christ helps aginst the wiles of the devil) is mentioned (p. 163) but time and again the author proves that she has understood little about the painting. For, in spite of her earlier remark that rational meanings will not be looked for, she regularly does exactly that, resulting in interpretations that are often very questionable.

Some examples: Moses (on the pillar in the central panel) is said to be considered a follower of the devil by Bosch (p. 170), the ‘woman’ (it is a man) holding a little dragon in the central panel (to the left) has caught this dragon in a hunt and now brings it to the Sabbath (the scene to Anthony’s left) (p. 176) and the birdhouse on top of the bathhouse-building in the central panel refers to the fusing of mercury and sulphur (p. 180), as does also the couple on the fish in the upper part of the right wing (p. 183). The text also has a lot of observational and other errors: the first name of Bosch’s father is said to have been ‘Laurent’ (p. 22), Anthony is said to have written seven ‘books’ (p. 123, should be: letters), in the right outer panel a rat is dangling from a tree (p. 159: it is a bovine or a pig but definitely nót a rat), the bread that is lying on a table in the lower right inner panel is called ‘two eggs’ (p. 184) and one of the pipes of the bagpipes in the left inner panel becomes an arrow piercing the knees of the piping monster (p. 189). And to top it all: in the left outer panel the author does not even recognise Judas: it is just ‘a man turning his back, as if in cowardice’ (p. 159).

No wonder that the author concludes on page 193: ‘There can be no rational interpretation of these paintings’. But when, on the same page, she asserts that not even Bosch himself could have given a rational explanation for all the separate units of his triptych, the arrogance of the modern art historian becomes a bit too much. And yet, on the very same page, she also writes that perhaps someday someone will find the map in this ‘labyrinth of symbolism’. About this (eventually very disappointing monograph on the Lisbon triptych) Marc Rudolf de Vrij observed: ‘It makes me wonder what Ms Rembert thinks she has been contributing to Bosch scholarship by writing this’ [De Vrij 2012: 6].