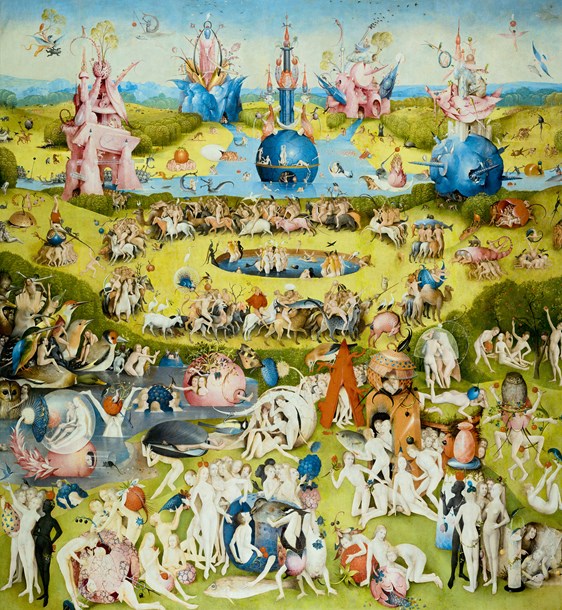 In this article Pokorny is looking for representations of the Seven Deadly Sins in the Garden of Delights triptych. He considers the triptych a profane painting with satirical content, in which innocent-looking sexual activities are ironically intended as a criticism of sins. According to the author, Bosch’s central panel deals in an innovative way with a theme that can also be seen elsewhere (i.a. in a panel by Dieric Bouts and in two works produced by Bosch assistants of followers: the Garden of Eden panel in Venice and the left inner panel of the Bruges Last Judgement triptych): the Garden of Eden as a paradisum voluptatis (paradise of delights) and as the reward for a God-fearing life. The way in which Bosch deals with this theme in the central panel is innovative, because he left away the angels, and because with a wink (augenzwinkernd) he turned the paradise of delights into a satirical and parodying topsy-turvy world, in which forms and contents are reversed. Not only by giving birds and fruits abnormal, huge sizes, but also by adding references to the Seven Deadly Sins.

References to Luxury are easy to find: the flirtatious and hugging couples with men that often grab the women’s breasts or genitals. Bruegel copied the transparant bubble and the huge mussel in his Luxuria drawing, which proves that these motifs were seen as symbols of Luxury. Probably, some of the absurd or obscene details were meant to be funny and made the intended viewers (Engelbert II of Nassau and his circle?) laugh. The figures in the central panel eating giant fruits refer to Gluttony. Some of the glass-like objects are interpreted as drinking glasses by Pokorny. And also the eggs may symbolize Gluttony and the precariousness of all earthly delights.

Pokorny argues that the people who are resting their head on their hand are images of Sloth. The woman in the cave underneath the blue ball who is stretching her arm toward a naked behind is probably a reversal of the woman in the right inner panel who watches her own reflection in the behind of a devil. The woman in the central panel on the contrary rejects the behind, and thus the diabolical mirror (Teufelsspiegel), and thus Vanity. A similar principle of reversal also seems to fit Wrath, for there is no fighting in the central panel, everything is quiet and peaceful. Whether Bosch also applied this principle to Envy and Greed in the central panel is something the author does not want to affirm. But everywhere we look, we see propertyless people without envy and unselfish sharing.

City-dwellers, clerics and noblemen may have wondered how things that were sinful before death could be allowed after death. But Bosch intended his Garden of Delights as a satirical parody of the paradise of delights after the Fall of Man and as a sharp rebuke of sinfulness.