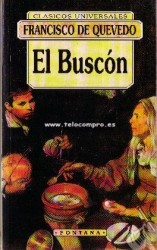 El Buscón (complete title: Historia de la vida del Buscón llamado don Pablos exemplo de vagamundos y espejo de tacaños = History of the life of the Swindler named don Pablos example of vagabonds and mirror of cheaters) is a picaresque novel written by the Spanish author Francisco de Quevedo y Villegas and published in 1626 (although it was probably written circa 1603). The Reader’s Companion to World Literature [New York, 1973 (2), pp. 401-402] defines the genre of the picaresque novel as follows: ‘The life story of a good-natured rogue (Spanish: picaro), a clever and amusing adventurer of low social class who makes his way by tricks and roguery rather than by honorable industry. When he does work, he begins with petty, menial tasks (often as household servant, valet). His immoral rascality manages somehow (even when he takes up with thieves) to fall a hairbreadth short of actual criminality – or so at least he himself maintains. The story is usually told by the picaro in the first person, as autobiography. Episodic in nature, the loose plot consists of a series of thrilling incidents only slightly connected and strung together without organic relationship. Usually it is a novel of the road, and the hero wanders from place to place as well as from job to job, rushing headlong from one impossible situation to another’.

El Buscón, with its protagonist and narrator don Pablos, matches this description in a perfect way. The plot is indeed very loose and haphazard and each episode is worked out in a superficial way. Typical traits of Quevedo’s style are the social satire (sooner or later, every class and profession is taken to task) and the continuous exaggerations. An example of this latter characteristic is the description of a mulatto wearing a hat with more brim than a mountain slope and more top than the crown of a nut-tree, and a sword with more ironwork than the gate of the royal palace. He wore a buffalo-leather jacket and his face looked as if it was held together by a number of scars (pp. 206-207). In the eyes of a modern reader Quevedo’s novel will probably not impress much. It ends rather abruptly and the planned second part was never written (a bad sign?). The Reader’s Companion to World Literature does not even mention El Buscón, as opposed to that other Spanish picaresque novel, La Vida de Lazarillo de Tormes (circa 1554). The entry ‘picaresque novel’ in H. Van Gorp et al., Lexicon van Literaire Termen [Louvain, 1991 (5), pp. 303-304) does mention El Buscón, though.

El Buscón is sometimes mentioned in the literature about Bosch because there is a very short reference to the painter in the novel. In the third book, chapter 2, Pablos takes up with some idlers and beggars in Madrid who repair their clothes in the morning, before engaging upon their daily ‘task’: Uno, hincado de rodillas, arremando un cinco de guarismo, socorría a los cañones. Otro, por plegar las entrepiernas, metiendo la cabeza entre ellas se hacía un ovillo. No pintó tan estrañas posturas Bosco como yo vi [one of them, botching himself under his stretched-out arm, resembled the letter L; another one, on his knees and darning his long hose, looked like the number 5; yet another one tried to mend the crotch of his trousers and clapped his head between his legs coiling himself up into a ball of yarn. Never did Bosch paint such odd postures as I saw – translation in Heidenreich 1970: 178-179 (note 37)]. This reference to Bosch does not amount to very much: it is but a superficial witticism and does not allow the claim that the worlds of Bosch and Quevedo are closely related. At the most, this sentence can lead to the conclusion that Quevedo was aware of (some) Bosch’s paintings.

By the way. In Boom [2016: 84] we read about this short passage: ‘In 1625 [sic] Quevedo published his Historia de la vida del Buscón (“The history of the life of the swindler”), a picaresque novel that is partially situated in Alcalá de Henares, the university town to the east of Madrid where Quevedo had been a student. In this novel the narrator describes how he meets some students who are repairing their shabby clothes’. As mentioned before, the scene is situated in Madrid (not in Alcalá de Henares), and it deals with vagabonds (not with students).