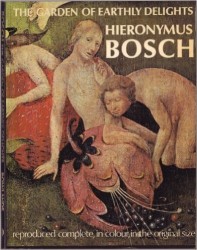 This is the English version of an originally French edition (see Jouffrey 1977). This book largely owes its appeal to the fact that the complete inner panels of the Garden of Delights tryptich are reproduced in the original size and in colour. In order to achieve this the tryptich had to be divided into (virtual) fragments but the way in which the photos have been cut out, was not always fortunate. The introductory text is limited to a few (3) pages.

According to Rowlands the overall theme of the tryptich is the Last Judgement, but Bosch deals with it in a revolutionary way. Bosch clearly warns us of the dangers and temptations of worldly beauty. On the central panel we see naked, primitive mankind satisfying its natural desires under a summery sun and losing itself in sexual lust. Rowlands agrees with Gombrich’s hypothesis, not regarding the closed wings but regarding the central panel: here we see the sinful descendants of Adam in the days of Noach. Bosch depicted the Sicut erat in diebus Noe motif by means of some sort of Love Garden (a popular theme at the Burgundian court) but he rendered the sexual aspect far more explicit than was customary.

The author also points out that the painting contains a number of astrological and alchemical references but he rejects an overall astrological interpretation of the tryptich. Neither does he give much credit to Fraenger’s theories. Fraenger reduces Bosch to the level of a smart illustrator and according to Rowlands he is much more than that, namely a brilliant preacher who painted horrifying sermons in order to warn of impending doom.