Salvation through imitation: the meaning of Bosch's 'St Jerome in the wilderness' 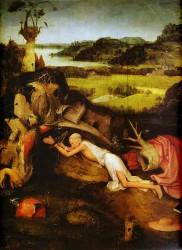 “Salvation through imitation: the meaning of Bosch’s St. Jerome in the wilderness” (Wendy Ruppel) 1988

For Bosch the holy hermits (especially St. Anthony and St. Jerome) are a paragon of man’s struggle against Evil. Because of their true faith they triumph over temporal worries and evil forces [4]. Ruppel intends to show how Bosch brings his message through a meticulous analysis of the visual details and contextual data of the Ghent St. Hieronymus panel.

In all his depictions of hermit saints Bosch represents the protagonists as exemplary followers of Christ. In the St. Anthony triptych (Lisbon) for example [6]. In the Ghent St. Hieronymus Bosch uses several allusions to stress the parallellisms between Hieronymus’ personal experiences and Christ’s Passion. His source was one of Hieronymus’ letters: the Letter to Eustochium. In this letter Hieronymus describes how he experienced visions of naked women and how he threw himself desperately at Christ’s feet, burning with desire. That is why Bosch painted Hieronymus lying on the ground with a crucifix in his arms [7]. Tolnay signalled that this was an iconographic innovation [8, note 7]. Hieronymus’ position is a visual parallel with Christ at the Cross. And Hieronymus’ suffering is a parallel with the suffering of Christ [8]. Bosch’s stresses Hieronymus’ desolation by contrasting the pleasant landscape in the background with the barren rocks which constitute the saint’s cave [8].

This imitation of Christ is further elaborated by Bosch in a symbolical way. The bird’s nest in the upper left and the fox’s hole in the lower left (situated on the same vertical axis) (here Ruppel forgets to mention the nests in the little pond up front) refer to Matthew 8: 20-22 (see also Luke 9: 58). In this biblical text Christ advises his followers to give up all worldly possessions. This is what Hieronymus is doing, in an exemplary fashion [8-9]. As a matter of fact, in his letter to Eustochium Hieronymus also refers to this biblical passage [11]. The presence of the cock next to the fox is secondary here and only refers to the potentially evil character of the fox: the fox is sleeping and therefore harmless. Here Ruppel disagrees with Friedmann (and to a lesser extent also with Bax) [8, note]. Erroneously Ruppel seems to ignore the negative connotation of ‘sleeping’ in medieval edifying contexts (the sleep of sin) and the fact that sleeping was negative for St. Hieronymus because it was during his sleep that the evil visions appeared, as he himself declares in his letter to Eustochium.

Bosch uses the biblical ‘foxes have holes / birds have nests’-topos to refer to Christ’s suffering at the Cross. The same happens in fourteenth- and fifteenth-century Middle Dutch texts. At the Cross Christ did not have a place to lay down His head either. Ruppel only gives one literary example of this and refers to Marrow 1979 for more material [9, note 12]. In fifteenth-century descriptions of the Passion the biblical passage is interpreted as a reference by Christ Himself to His own suffering at the Cross (here Ruppel does not give any primary text to confirm this). The fact that Hieronymus’ position on the ground is very uncomfortable also refers to Christ’s Passion [9].

Hieronymus not only imitates Christ, he is also protected by Him. The cave in which the saint is lying, has been interpreted in different ways. Bax, Combe and Fraenger have signalled sexual allusions [9, note 13]. But there is no cave, only a cleavage in a rock. Here Bosch refers to the traditional exegetical comments on The Song of Songs 2: 14 (look for thy salvation in the cleavages of the rock = in the wounds of Christ). This metaphor (rock cleavages = wounds of Christ) can also be found in Dutch edifying texts from the fourteenth and fifteenth century. Ruppel offers one Latin example of this. The red spots that surround the saint refer to the blood of Christ’s wounds. At the top of the bulge Bosch painted a crown of thorns, which confirms the metaphor rock = Christ [9-10]. The stone tablets which have fallen down probably refer to the tablets of the Old Law: the Old Testament is making place for the New Testament [10, note 17].

By hitting his breast with a stone (see the stone underneath Hieronymus) the saint imitates Christ’s suffering. Furthermore he is united with Christ by ‘living in His wounds’: Hieronymus is lying in a rock cleavage = in a wound in Christ’s side [10]. In some texts this wound even becomes a substitute for the womb: in that way the soul is accepted by Christ’s body as a child by the belly of the mother [10, note 19]. By referring to the lines of Matthew Bosch offers the following message: the imitation of Christ boils down to the negation of all worldly possessions + suffering (to take up the cross and to undergo temptations, just as Christ) [11].

In the Ghent panel Bosch agrees with the fifteenth-century ideas about piety: on the one hand the active life, on the other the contemplative life. In his panel Bosch unites both. By means of his acts (hitting the breast) and position (lying on the ground) Hieronymus imitates Christ’s suffering. By meditating about Christ’s wounds, he can ‘live’ in them. The ‘active’ Hieronymus is physically present for the spectator, but Christ’s wound is only there in a metaphorical sense. In this way the spectator is stimulated by the painting to contemplate and meditate himself [11]. The fox’s hole and bird’s nest contrast with Hieronymus’ desolation (he has no roof above his head). In his own writings Hieronymus uses the biblical passage to propagate the imitation of Christ. Christ Himself uses the metaphor to refer to His crucifixion. Thus the spectator goes further and further back in time getting closer to the source of the metaphor: the Passion of Christ [11-12]. Bosch’s message is neatly intertwined with the message of his namesake, because Bosch visually depicts the words of the saint. Their common message is: the imitation of Christ as the path to salvation.

Although Ruppel’s text may seem somewhat artificial and cumbersome here and there, she is probably very close to the truth when she points out Hieronymus’ Letter to Eustochium and Matthew 8: 20-22 as sources for the Ghent painting. It is a pity that she does not mention the little owl and the great tit, to the saint’s right.