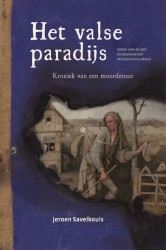 This historical novel, situated in the city of ’s-Hertogenbosch around 1500, presents itself as the so-called edition of a manuscript in which the (anonymous) protagonist writes a chronicle about his own life. The book comprises a prologue and three parts. In the prologue the narrator, son of a village priest and his concubine, witnesses the great fire of ’s-Hertogenbosch in 1463 as a young lad. His mother perishes, but before she dies he promises her to develop his writing skills in order to gain a better life than his parents. His father is difficult to get along with and thirteen years after the fire he leaves his home to discover the world.

In part I (situated in the year 1477) the protagonist arrives in ’s-Hertogenbosch as a pedlar. He tries (in vain) to get a job with the uncongenial notary Marten Greve (his nephew), has a short erotic relationship with Christine, a maid of Anthonius van Aken (Jheronimus Bosch’s father), in the city’s environment he discovers a dilapidated pleasure garden called Sicut erat in diebus Noe (clearly inspired by the central panel of the Garden of Delights) and gradually becomes the leader of the (historically attested) popular uprising in ’s-Hertogenbosch. The protagonist is convinced that the city councillors of ’s-Hertogenbosch are to blame for the 1463 fire: due to the insufficient social services many labourers are forced to practise their profession underground and the fire is thought to have been caused by one such underground and clumsy draper. But the uprising is a failure and the protagonist has to leave the city in silence to save his life.

In part II (1481) we witness the chapter of the Order of the Golden Fleece in ’s-Hertogenbosch. Meanwhile, the protagonist has become a bookseller in Brussels and now he returns to ’s-Hertogenbosch in order to sell his books. He meets Christine again (now married to a homosexual and mother of a four-year-old son who looks a lot like the protagonist) and gets acquainted with Pieter de la Baume, an old squire. For a long time the protagonist believes he is on the trail of a conspiracy against Maximilian of Austria but eventually this proves to be based on an error, after which the protagonist’s suspicion is directed at Pieter de la Baume’s son who is on the verge of becoming a knight of the Golden Fleece but who is also planning to defect to the king of France, like many other Burgundian noblemen. The protagonist’s investigations result in his being taken prisoner and being tortured but eventually he is able to talk to duchess Mary of Burgundy. In the end the protagonist’s suspicion of Willem de la Baume proves to be justified.

As a result, he becomes a chronicler at the court of Maximilian in Vienna, thus redeeming the promise to his mother. This is told in part III, situated in 1518 (suddenly 37 years later). As an envoy of Maximilian the protagonist returns to ’s-Hertogenbosch where he has to convince Maximilian’s bastard daughter (begotten in 1481 during the chapter) to leave her monastery and to come to Vienna. At the same time Henry III of Nassau orders him to look for The False Paradise (to be understood as the Garden of Delights), a Bosch painting that has been stolen from Henry’s palace in Brussels. Furthermore, the protagonist also wants to find his son (the result of his short 1477 relationship with Christine, who has died in the meantime). A lot of attention is spent on the conflict between the city council and the canons of St John regarding the taxes on beer and wine, but in the end the protagonist (thanks to Christine’s brother who pretends to be deaf and blind) finds out that his nephew, Marten Greve (who is working for the canons), is the real cause of the 1463 city fire and also that Marten Greve used the money that was meant for the construction of St John’s church to restore the pleasure garden Sicut erat in diebus Noe in order to arrange orgies for the ’s-Hertogenbosch dignitaries. This Marten Greve is also the thief of The False Paradise. During a final and fatal confrontation the protagonist kills his nephew with a knife after which he is sentenced to death on the accusation of murder. In prison, immediately before his execution, he is visited by a priest: his son.

The narrative technique of this novel is not without flaws. Its four parts, separated by substantial time gaps, deal with a new topic each time (the city fire, the popular uprising, the conspiracy during the Golden Fleece chapter, the exposure of Marten Greve) and it are only marginal story lines that come together in the end. Because of this the plot as a whole lacks drive and cohesion which lessens the impact on the reader. Furthermore, the plot is not without improbabilities and imbalance. The protagonist’s being appointed imperial chronicler, the presence of this paradisiacal pleasure garden near ’s-Hertogenbosch and the fact that upon discovering the False Paradise painting the protagonist immediately knows that he will find Marten Greve in this pleasure garden [p. 381] are just three examples of plot twists that make a rather implausible impression. As for lack of balance: some things are dealt with in a surprisingly extensive way, such as the almost pedantic history lessons delivered by Pieter de la Baume about the duchy of Burgundy and the taxes issue (the latter not all that surprising as the author has written a master thesis about the subject), whereas others hardly get any attention, such as the relationship with Christine and the theft of the False Paradise painting. In particular the third and last part suffers from an excess of motifs: here, too many things are going on at the same time and too many truths come out in order to create a convincing narrative frame. While reading the novel (but this is only a marginal remark) one has the constant feeling that the protagonist is quite a Nosy Parker and troublemaker who time and again gets himself into situations without this really being necessary. And what will seem at least weird, and perhaps even aggravating, to many readers is the fact that we never learn the protagonist’s name.

Nevertheless, these narrative flaws should not encourage to leave Het valse paradijs [The false paradise] unread, because there are positive things as well. Savelkouls’ writing style is fluent and pleasant and regularly (perhaps not frequently enough to be called brilliant, though) tries to sound late-medieval. In particular when imagery is at stake: a character’s hunger for revenge, for example, is bigger than a priest’s hunger for relics and somebody who is in a mist does so like Noach after his first wine harvest. The sporadical humour should also be mentioned: examples of this are the totally wrong and therefore comical judgement of a seller of stationery about the then innovatory art of book printing [p. 176], a nobleman who claims (in 1481) that surely Jheronimus van Aken will never want to become famous as a painter of devils [p. 223], the running gag about the question whether Christ’s loincloth was secured by means of a button or a pin [i.a. p. 272] and the references to the smoking of tobacco in part III. Nicely enough, there are also some anticipations, attesting to the author’s sense of functional plot writing: page 12 already mentions the ‘life in the days of Noach’ motif and on page 24 we already read the question whether the town ramparts of ’s-Hertogenbosch are also capable of withstanding treason from within (quite a relevant issue, considering the part Marten Greve will play in the novel). Then again, other things seem rather non-functional and redundant, such as the passages about the actors who are staying in the same inn as the protagonist (in part II).

Although we meet Jheronimus Bosch only once in this novel (and only seen from a distance for that matter), those who are familiar with the master’s oeuvre and in particular with the modern literature about the painter, will find it pleasant to recognize quite some things that have been woven into the story, sometimes quite conspicuously, sometimes in a more hidden and subtle way. Furthermore, the historical setting of the plot offers more than one opportunity to learn something new and the reader is offered a nice portrait of ’s-Hertogenbosch circa 1500 (although obviously, one should constantly wonder where fiction begins and historical facts end).