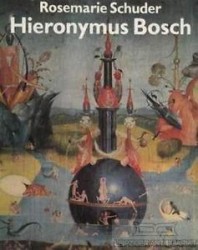 Schuder tries to solve Bosch’s ‘riddles’ by linking political, social and cultural topical matters in the Netherlands around 1500 to the spiritual world of the painter. A central role in this is played by two historical figures who were present in ’s-Hertogenbosch for short periods during Bosch’s life: the emperor Maximilian and Jacobus Sprenger (co-author of the disreputable Malleus Maleficarum).

Sometimes Schuder’s iconographical conclusions are revealing (for instance when she links the frequent depiction of the crescent moon to the hatred of the Turks in the fifteenth century) but in most cases they are not very convincing. A few examples. According to her the devils in the Madrid St. Anthony panel are not real devils, but a kind of landsknechts and inquisitorial monks in disguise. On the central panel of the Garden of Delights Bosch wanted to depict a peaceful dreamworld as a reaction against the war and the turmoil he saw around him. And the so-called ‘fourth king’ in the Madrid Adoration of the Magi is supposed to be Maximilian, whose enjoyment of power is being mocked in this way. Bosch also had a low opinion of the Dominican order: Schuder recognizes a Dominican nun in the woman who is torturing a soul in the Hell tondo of the Madrid Seven Deadly Sins panel.