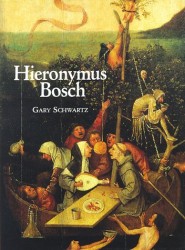 For a reason that somewhat escapes us Gary Schwartz is called ‘one of the world’s leading authorities on Bosch’ by the blurb on the cover. Although the text of this small monograph is popularizing and aimed at a general public, it belongs to the basically reliable kind. Apparently Schwartz has read Bax, Marijnissen ànd Vandenbroeck and his (as a result of the thin nature of this book: limited) approach of Bosch follows the steps of these authors.

Modern researchers often recognize a lot of themselves in Bosch: Catholics call him a Catholic, people from Brabant believe you can only understand Bosch if you are from Brabant yourself, and intellectuals see him as an intellectual. Although Schwartz is an unorthodox Jew himself, he thinks Bosch was a good Catholic with high intellectual skills [pp. 10-11]. Bosch painted the important religious issues of his own times: the struggle between good and evil, the beginning and the ending of man’s history. In doing so he was influenced by the artistic tradition, but language was also a source of inspiration which makes him a kindred soul of the Dutch and German humanists. Bosch’s art reflects the fears and wishes of the late-medieval Dutch bourgeoisie, but the extravagant elements in his work can also be explained by the fact that his patrons in many cases belonged to the high nobility, and Bosch adapted himself to their taste [pp. 12-13]. Bosch was a member of a Catholic fraternity and had received a minor order (probably that of ‘lector’) [p. 35].

Schwartz’s discussion of the Vienna Last Judgment triptych is clearly based on Bax (1983). Bosch was inspired by miniatures, misericords and devotional sculptures, but also by the Middle Dutch language as spoken in Brabant [p. 57]. Schwartz points out, though, that some of Bosch’s works were painted for noblemen who did not speak Dutch, which puts Bax’s theories somewhat in perspective: Bosch was more than a painter who only translated linguistic material into images [p. 58].

According to Schwartz the theme in the central panel of the Garden of Delights triptych is man’s wrong interpretation of God’s command to Adam and Eve to procreate. God meant ‘within marriage’ and the eroticism in the central panel is taking place outside marital bonds: we don’t see any children or pregnant women [p. 75]. Probably what we see here is mankind in the times of Noach [p. 76]. Perhaps the triptych was commissioned by Henry III of Nassau on the occasion of one of his marriages [p. 84]. Bosch did not only paint Evil, but he also paid attention to the Good in the world [p. 87].