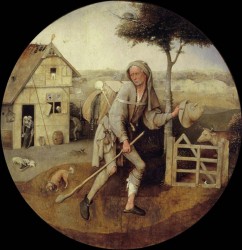 In this article Seligmann offers an iconographic interpretation of Bosch’s Rotterdam Pedlar tondo. The author states that Bosch did not want to represent the Prodigal Son. To account for this he not only refers to two arguments of Baldass (the protagonist’s advanced age and the heavy burden he is carrying) but he also adds two new arguments: the well-lined purse and the knife refer to the protagonist’s modest wealth and to his willingness to defend his possessions and do not agree with the complete poverty of the Prodigal Son when he returned to his father’s house. Seligmann interprets the tondo’s protagonist as a pedlar who is travelling restlessly throughout the land and has to fight for a precarious existence. From the observation that the pedlar is moving from the left side of the tondo (full of negative symbols) to the right side (with only positive symbolism) Seligmann concludes that the pedlar has abandoned his foolish and sinful life for a more worthy existence, ‘an optimistic note, rather unusual in Bosch’s work’.

Unfortunately Seligmann’s interpretations of the tondo’s iconographic details are highly unsatisfactory because he delivers too few or no arguments for what he says. The hat in the pedlar’s hand for example is said to point out that the pedlar is throwing away his reprehensible self to become a new man, but this suggestion is nowhere accounted for. The owl on the branch right above the pedlar is the bird of wisdom, but an argument for this fails. The barrel without a bung is a vaginal symbol, the long spear is a phallic symbol, but Seligmann only refers to a nineteenth-century book about German medieval folklore. The bird to the owl’s right is a ‘singing bird’ (Seligmann does not notice that it is a great tit) and it is interpreted as a symbol of carelessness with the help of one sentence from Geyler von Keysersberg about the sinners who are always singing and leave the worries to the birds in the wood. Moreover, this sentences receives an erroneous interpretation: with Keysersberg it are not the birds that are singing, but the sinners and the suggestion that the great tit in the tondo is singing, is gratuitous. The gate the pedlar is going to pass is a ‘good gate’ because it has a firm construction and thus it contrasts with the delapidated brothel. In itself not an incorrect observation, but as an iconographic interpretation rather superficial.

Seligmann’s interpretation of the pedlar’s ladle, awl and knife as phallic symbols deserves special mention, though. Although the reference here is only one thirtheenth-century French text, it is a refernece in which a ladle, awl and knife belong to a pedlar ànd are being used in a clearly erotical context. In agreement with Combe Seligmann also sees a visual and thematical similarity between Bosch’s pedlar and the Fool from the Tarot game, without identifying the pedlar with this Fool. But he does signal a common forefather of both: a marginal illustration from the Luttrell Psalter: a pedlar with a stick in his hands and a basket on his back is walking (from right to left) in the direction of a mermaid (half fish, half woman, mirror in her right hand, comb in her left hand) while a dog is biting him in the right calf. Seligmann interprets this as man who is being attracted by sin and reminds us of the fact that Bosch’s pedlar is walking from left to right, away from the brothel. Meaning that Bosch’s pedlar is no longer attracted by sin, but is leaving it behind him. The bandage at his leg and the growling dog point out, though, that he has not always been able to avoid the brothel. The iconographic comparative material that is brought together here (although it concerns only one visual source) is extremely interesting. The fact that the pedlar is holding a stick and is being attacked by a dog is indeed a very remarkable visual parallel with Bosch’s pedlar in Rotterdam (and with the one in the closed wings of the Haywain). Unfortunately Seligmann has not followed this track any further.

Weak is also Seligmann’s interpretation of the dog in the Rotterdam tondo: he thinks it definitely has to be a symbol, but is unable to track down its meaning. He supposes that the dog is a representative of Good and that he functions as a warning of sin. A hypothesis that sounds somewhat artificial, as it remains unclear why the dog should be growling at the pedlar if he is following the good path and leaving the brothel behind him. If he also had involved the exterior panels of the Haywain in his interpretation, Seligmann would probably have concluded that the dog in both representations is a key symbol, but he ignores the closed wings of the Haywain. The most important contribution of Seligmann’s article is the presentation of some interesting, though limited cultural-historical material: a French text and a marginal illustration in an English psalter. Because his analysis is mostly rather superficial and arbitrary, it may duly be called a missed opportunity.