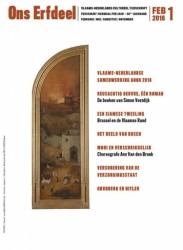 In this article Manfred Sellink announces the Bosch year 2016. Both Bosch’ and Bruegel’s works are enigmatic and have caused an avalanche of academical and pseudoscholarly publications with extremely divergent interpretations. But in some respects there are also differences between the two painters: Bruegel worked on his own and was mildly ironical, whereas Bosch worked in a (family) workshop and looked at the world in a rather dark and eschatological way. During the transition from the fifteenth to the sixteenth century Bosch produced an intriguing and innovating oeuvre but at the same time he was a typical representative of his own times and strongly influenced by the late medieval urban intellectual and religious (pictorial) tradition.

In close collaboration with the Radboud University Nijmegen and the Jheronimus Bosch 500 Foundation the Bosch Research and Conservation Project (BRCP) was set up and an exhibition was organised in the Noordbrabants Museum (’s-Hertogenbosch), with some twenty Bosch paintings and an equal number of Bosch drawings. Not an easy mission and an admirable achievement. The Prado also organises an exhibition that will undoubtedly be worth visiting.

The BRCP’s purport was a systematical study of as many Bosch paintings and drawings as possible from a material-technical and scientific perspective. The new facts and insights resulting from this research will be presented in 2016 and will undoubtedly be thoroughly scrutinised. Anticipating the exhibition and the BRCP publications it seems that what was long considered work exclusively produced by Bosch must rather have been a collaborative effort of an extensive workshop led by one mastermind and next to him several hands of assistants (family?).