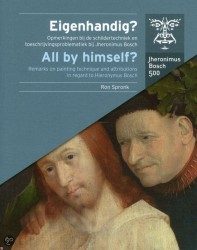 Eigenhandig? Opmerkingen bij de schildertechniek en toeschrijvingsproblematiek bij Jheronimus Bosch / All by himself? Remarks on painting technique and attributions in regard to Hieronymus Bosch (Ron Spronk) 2011

This booklet contains the text (in Dutch and in English) of the inaugural speech that Ron Spronk presented at the Radbout University Nijmegen on 6th October 2010 on the occasion of his appointment as ‘SNS Reaal Fund Chair Hieronymus Bosch and Early Netherlandish Painting’. This special chair has been created in order to promote attention in education and scholarly research for late-medieval painting in general and more specifically for the work of Hieronymus Bosch.

Within the group of 25 to 30 works that are attributed to Bosch striking differences can be observed in the manner of execution. Spronk attempts to illustrate the complexity of this matter by comparing the painting technique of two Bosch paintings, the Ghent Carrying of the Cross and the London Crowning with Thorns. In doing so he refers to recent technical examinations of these paintings in which x-radiographs, infrared images and dendrochronology were used.

On the London Crowning with Thorns differences can be observed between the preparatory underdrawing and the final execution. Such changes in composition, which are rule rather than exception with Bosch, show that we are not dealing here with slavish copying of an earlier developed concept. In the past different styles of underdrawing have been detected in the works of Bosch. The conclusion of some researchers was that Bosch adapted his style of underdrawing to circumstances. Recently Koreny has put forward the thesis that in Bosch’s workshop there was a highly talented, left-handed assistant (whom he coined the ‘Master of the Haywain’). But Spronk signals that apart from large differences in technique we can also observe interesting similarities and that in the case of Bosch we are probably dealing with a family-run workshop.

The painting technique of the Ghent Carrying of the Cross and the London Crowning with Thorns is fairly divergent, especially the rendering of the surface textures of the materials that are depicted and the use of flesh tones. To conclude from this that an attribution of both panels to one painter becomes untenable, would be somewhat premature because the technical execution also shows some striking similarities. Around 1500 it was rule rather than exception that a number of hands, often collaborating intensely, were active in a single workshop and we may safely assume that this was no different in Bosch’s workshop. Bosch’s father was a painter and three of his uncles, two of his brothers and two of his nephews were painters too and it is not improbable that all these family members were active in the family workshop, located at the Market of ’s-Hertogenbosch. We will probably never be able to tell who did what precisely, but it is tempting to think that Hieronymus, being the most talented artist in the family, did the final touches to these works and in doing so provided them with a kind of seal of quality. A few years from now the results of the Bosch Research and Conservation Project will hopefully bring more clarity into this matter.

The Bosch Research and Conservation Project was initiated in 2009 and is an international project that aims at documenting and studying the complete works of Bosch at the highest level in preparation of the commemoration of the 500th anniversary of Bosch’s dying day in 2016.