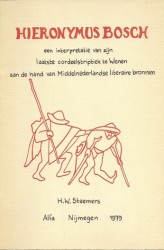 Steemers relates Bosch’s Vienna Last Judgment triptych to non-mystical, visionary literary texts, in particular those from the Netherlands and dating from the period between the thirteenth and mid-sixteenth century. He does this in a more profound and more extensive way than other authors before him, not to demonstrate that Bosch really knew these sources and was influenced by them, but to point out similarities, thus bringing Bosch’s triptych back to life. The texts he quotes, belonging to the cultural environment of Bosch and his contemporaries, turn out to be clarifying and interesting comments on the scenes Bosch painted.

Steemers’ profound approach implies that the reader has to become thoroughly acquainted with the Vienna painting but Bosch’s paintings, and in particular his triptychs, demand such an approach. It is even a pity that towards the end of his analysis of the central panel Steemers gets somewhat sloppier and forgets to discuss a number of scenes.

The author clearly agrees with the vision on Bosch that considers the painter a moralist who was in close touch with his cultural environment. Steemers’ detailed description and cultural-historical analysis of the triptych makes him a close follower of Dirk Bax, whose even more detailed analysis of the same triptych would be published posthumously in 1983.