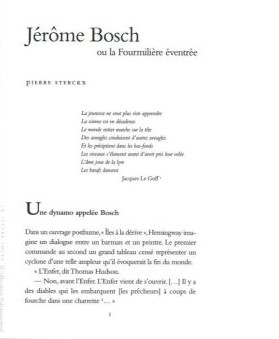 Unfortunately, my opinion (and I suppose that of many other readers) about this little book of the Belgian art critic Pierre Sterckx (1935-2015) cannot be very positive. On page 55 the author writes (I translate from the original French): ‘All the attempts to interpret the art of Bosch have failed because they wanted to lock him up inside some sort of measuring system. But the space of this art does not stop mutating while dividing itself, it is chaotic and not measurable’. This explains the title: The turned-over ant hill. Sterckx seems to have been inspired by a number of modern philosophers and writers (Michel Foucault, Gilles Deleuze, Michel Houellebecq) but the only result is 124 pages of uninterrupted, pseudo-intellectual mumbo jumbo making the reader wonder what on earth Sterckx is actually talking about. Sterckx is (was) one of those authors about whom Roger Marijnissen would have said that they are writing about Bosch with a mirror in front of them. Which is to say: they only write about themselves. It is a fact that Bosch’s paintings can hardly be discerned in this pulp of Gelehrtenquatsch (another favourite epitheton – be it not ornans – of Marijnissen). To top it all, in footnote 10 on page 127 Sterckx writes about Marijnissen: ‘qui jouit d’une réputation à mon sens immeritée’ (who enjoys a reputation that is in my opinion undeserved). An arrogant, very tedious and utterly redundant little book. Reading it boils down to a sheer waste of time.