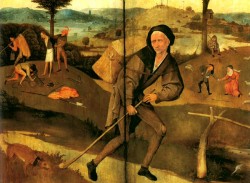 “Bosch, Bruegel, Everyman and the Northern Renaissance” (Margaret A. Sullivan) 2008

In this article Sullivan argues that art belonging to the ‘Northern Renaissance’ (15th-16th century) is not primarily characterized by italianizing stylistic features but by the creative use of classical models. In particular the satire genre (Juvenalis, Horatius, Lucilius, Varro, Lucianus, Persius, Martialis) has inspired the northern artists to important innovations.

The satirical genre, which was inherited from Antiquity, rebukes reprehensible behaviour in an entertaining way. In the fifteenth and sixteenth century there was a renewed interest in the genre, especially with the humanists. The intensive study and new editions of the classical satirists led to the writing of new satires, such as Brant’s Narrenschiff en Erasmus’ Moriae Encomium. Around 1500 visual artists also used this classical tradition to create a new kind of art. Two of these artist were Hieronymus Bosch and Peter Bruegel the Elder.

Sullivan then focuses on the closed wings of Bosch’s Haywain triptych and on his Rotterdam tondo. According to her the protagonists of these paintings are not pedlars (‘the pack he carries is not that of a peddler carrying goods for sale’, p. 126), but she calls them Everyman or Traveler. The key to the interpretation of these paintings lies with the satirical genre and with Christian humanism around 1500.

In the literature about Bosch Bosch’s Travelers are usually seen as negative figures, an interpretation that fits in with the satirical character of Bosch’s secular images. If the man who is carrying a heavy burden is seen as an example of bad behaviour, then this matches the growing interest in the satirical genre around 1500 and the northern tradition to use the classical satirists for moralizing purposes. Although elsewhere Bosch uses monsters and phantastic sceneries (things that can also be found in the menippean satire), here he seems to be more related to the realistic branch of Roman satire: he depicts a common man in an everyday environment to show an example of bad, immoral behaviour. The fact that Bosch’s protagonists travel around the world with a heavy pack on their back suggests that they are meant as a representation of Everyman, the fool who pays too much attention to the vanities of the world. This kind of immoral behaviour was heavily criticized both by classical satirists and by Christian moralists.

Since St. Hieronymus there was a clear tendency among Christian writers to punctuate their sermons and religious treatises with quotations from classical satirists. Around 1500 Bosch and his patrons were undoubtedly familiar with this habit of commenting on Biblical lines with the help of fragments from classical satires. The fool who is driven on by materialistic desires is a topos with Roman satirists such as Juvenalis, Horatius and Persius. Bosch’s image of the heavily laden traveller with a worried expression on his face was very suitable to illustrate the famous line from Juvenalis’ tenth satire: Cantabit vacuus coram latrone viator (he who travels with an empty purse, sings when he meets robbers). Bosch’s travellers are a moralizing negative of this classical wisdom: they have every reason to be worried, because of the fact they are too fond of earthly possessions, as is confirmed byt the background scene in the closed wings of the Haywain, where a traveller is the victim of robbers. In the Rotterdam tondo the details that were interpreted in the past as signs of the traveller’s poverty, should rather be seen as signals that here we are dealing with a fool whose mind is confused because he gets his priorities wrong. In this context Sullivan refers to late-medieval playing cards representing a fool whose protagonists show external parallels with Bosch’s travellers.

If we interpret the protagonist of the closed wings of the Haywain as a satire in the de contemptu mundi tradition, as a disapproval of the greedy and too worldly Everyman, then the closed wings are a suitable introduction to the central panel, which we see when the wings are opened. Bosch’s creative use of the classical literary tradition and his ambition to create a new artistic genre turn him into a real Renaissance artist.

In his Everyman drawing (1558) Bruegel depicted the same de contemptu mundi motif as Bosch, but he based his satire on another well-known classical proverb (nosce teipsum – know yourself). Both Bosch and Bruegel made use of classical and Christian sources, thus following the satirical tradition, but Bosch focuses on ‘the carrying of luggage’ (to cherish earthly possessions too much and to neglect spiritual things) and on the fear of losing what one has, whereas Bruegel stresses excessive greed, the desire to always add more to what one already has.

The fact that she wants to see the classical proverb ‘cantabit vacuus coram latrone viator’ as the basic key to Bosch’s so-called Everyman representations is very weak. If the fear of being robbed and of losing one’s possessions would indeed be the basic idea of these paintings, why then did Bosch also paint a dancing farmer and shepherdess in the closed wings of the Haywain? And why then is there no sign of a robbery in the Rotterdam tondo?

That Bosch’s so-called ‘travellers’ are negative characters is in flat contradiction with the observation that Bosch always shows the good example in the closed wings of his other triptychs.