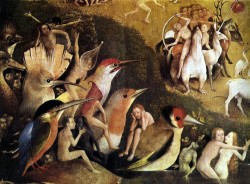 In this article these two art historians (apparently man and wife) focus on the birds in the works of Bosch, especially on the birds in the Garden of Delights triptych. They identify the birds of abnormally huge size in the central panel of this triptych as a jay, a female duck, a hoopoo, a woodpecker, a robin, a goldfinch, a kingfisher, a drake and a tawny owl (the group to the left of the center) and the other birds as a great tit, a second jay and a second owl. Bosch not only depicted these birds in a true-to-nature way but he also seems to have had a profound knowledge of their behaviour and this applies to each individual specimen and to swarms.

At least some of the birds Bosch painted carry a symbolical meaning but in many cases this symbolism is difficult to understand. People in the Middle Ages attributed symbolical meanings to many birds, such as the owl, the hoopoo and the goldfinch, but often these meanings appear to be contradictory.

All in all a rather superficial article that limits itself to stating the obvious.