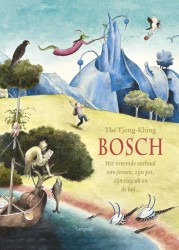 A picture book without words, intended for under fives. Its protagonist is Jeroen, a little boy who loses his cap, rucksack and ball and then tries to find them back. Every two pages he ends up in another part of a strange world filled with landscapes, monsters and other elements from Bosch paintings. Each time, the young reader has to look at the picture carefully in order to find out where the cap, the rucksack and the ball are situated. According to many parents under fives are fascinated by Bosch’s monsters.