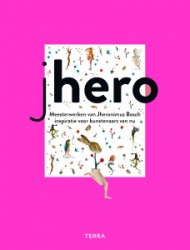 This publication announces itself as a ‘gift book’ and tries it utmost best to make a hip impression. This is proven not only by the somewhat far-fetched title (to be pronounced the English way and no, it does not refer to a rapper but to Jheronimus Bosch as the ‘hero’ of the Low Countries) and by the excessive use of the colour pink (unpleasant to the eyes as a background for white letters) but mainly by the layout, which Studio Kluif has adorned with often quite funny hybrid pictures of all kinds of details from Bosch’s paintings.

The book’s content is a rather arbitrary amalgam of (short and superficial) comments on a number of Bosch paintings, (short and superficial) responses to Bosch by ‘famous persons’ borrowed from other sources (only Jeroen Krabbé was explicitly invited by the editor to write a text for this publication) and (short and superficial) introductions to a number of works by modern artists who were inspired by Bosch. These ‘famous persons’ are Joost Zwagerman, Jeroen Krabbé, Bas Heijne, Frans de Waal, Alain de Botton, Thijs Caspers, Herman Pleij, Louise O. Fresco and Henk van Os. The modern artists are ‘Atelier Van Lieshout’, Jeroen Kooijmans, Salvador Dalí, Jan Fabre, Marc Mulders, Joost van den Toorn, Chris Berens, Jake and Dinos Chapman, Eveline van de Griend, Harald Vlugt, Guido Geelen and Jan Egas (who painted a smaller copy of the Garden of Delights between 1988 and 1995). Of all these artists who were influenced by Bosch Jan Fabre seems to be the most interesting one (apart from Dalí, of course) although Harald Vlugt easily wins the prize for the most saucy work of art.

According to the preface this little book can be used as a Jheronimus Bosch crash course but that is far from obvious. If a person with some Bosch know-how had proofread the texts a number of shortcomings and inaccuracies could have been avoided. Sometimes these things are nothing but details (such as the name of Paul Vandenbroeck being written as Paul van den Broeck on page 22). But more often this concerns wrong information, which can hardly be called a proof of sound expertise. A few examples…

On the whole, the datings of Bosch’s paintings in this book are dealt with in a very off-hand way.

Quite striking as well: the survey of Bosch paintings sums up twenty works of art (clearly inspired by the Bosch Research and Conservation Project) but, except for the inevitable Garden of Delights, the Bosch paintings owned by the Prado and by the Rotterdam Museum Boijmans Van Beuningen (Pedlar, St Christopher, Flood panels) are ignored for some reason or other. The Haywain triptych is briefly mentioned on pages 120-121 but only a few details are being shown and, to top it all, the Haywain details on pages 86-89 have wrong captions (The Last Judgment). The Prado Adoration of the Magi is completely invisible and, again to top it all, is sadly confused with the New York Adoration of the Magi on page 160.

Surely, better introductions to Bosch than this one are available. And yet, Jhero also has a couple of fortunate sentences. On page 81 for instance, regarding the diabolical messenger in the lower left interior panel of the Lisbon St Anthony triptych: ‘The meaning of this bird-messenger with an upside-down funnel on its head remains a mystery’. And on page 146, about the central panel of the Garden of Delights: ‘It is filled with allusions to adultery, sex or proverbs and all of these are still stumbling blocks for the art historians’.