The copy of the Garden of Delights in Budapest revisited 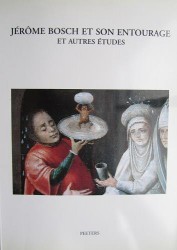 The Prado exhibition focusing on the restored Garden of Delights triptych (2000), where the copy (on canvas) of the central panel from the Budapest Museum of Fine Arts was on display, offered the opportunity to study this copy with technical means that were not available in Hungary. This contribution discusses the results of this technical research.

The study of the paint layers and of the bottom layer (unfortunately the underdrawing is untraceable) led to the conclusion that the original and the Budapest copy have been painted with the same technique. But the difference in artistic quality is obvious. The fact that the Budapest copy and the two other copies (Brussels / Nuremberg) that were on display in the Prado are of the same size as the original (the central panel of the Garden of Delights) raises the question how the copies after the Garden of Delights were made. Urbach supposes that these copies were not made after the original when it was in the Nassau Palace in Brussels, nor after a cartoon (which would have been insufficient to represent the complex colour scheme), but after a faithful copy on canvas that was produced in the Bosch workshop before the original left this workshop. This copy on canvas could have functioned as an aide-mémoire for future copiers and is called a copy princeps by Urbach. She believes the Budapast copy on canvas may have been this copy princeps.

A serious objection against this hypothesis is the following. The man with the ‘grape-head’ who is lying on the grass next to a women (to the right in the central panel) does not carry a little stem on his head in Budapest. This stem is present, though, in the very faithful ‘Pomereu’ copy (today in a Brussels private collection) and in the Madrid original it had disappeared but the restoration has made it visible again. This is a strong argument against the suggestion that the Budapest copy would have been painted in the Bosch workshop itself immediately after the painting of the original.