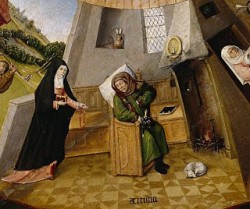 The ‘woman’ with a rosary in the depiction of Sloth in Bosch’s Seven Deadly Sins panel (Madrid, Prado) is a variant of the lazy man in a chair next to her: the woman is also representing the capital sin accidia. For the housewife praying the rosary was a way of escaping from household chores. The nun with a rosary in the bottom right corner of the Haywain’s central panel also has a negative connotation. In the Ship of Fools (Paris) and the Death of a Miser (Washington) the rosaries (belonging to a nun and to a miser) are probably only realistic details.

The fact that for Bosch the rosary has negative connotations could be related to Bosch’s aversion against the mendicant orders, especially against the Dominicans and their Society of the Rosary. Dresen-Coenders (1983) also interpreted the abbot holding a rosary in the bottom right corner of the Haywain’s central panel as a satirical comment on this society.

According to historian of religion and iconographer Van Baaren Bosch scholars too often rely on subjective prejudices and not enough on neutral, objective arguments. With this concise essay on the rosary in Bosch’s oeuvre he has given the good example, using only art-historical and religious arguments.

Nevertheless this article makes a rather superficial impression. Isn’t it obvious that the lady with a rosary in the Madrid Seven Deadly Sins panel is a religious woman who is reminding the lazy man of his spiritual duties? In the other details discussed by Van Baaren the presence of a rosary probably refers to the hypocrisy and the spiritual sloth of the persons who are holding the rosary. For Bosch the rosary itself did not have negative, but positive connotations.