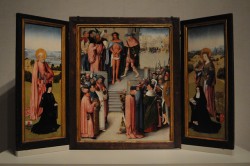 Peter van Os was born in Oss, a village near ’s-Hertogenbosch, before 1467. His parents were Jan van Os and Oda Wynricx die Smyt, he had two brothers and two sisters. Around 1480 the family probably moved from Oss to ’s-Hertogenbosch. Peter van Os studied at a university, probably at the university of Louvain from 1486 on. Around 1494 Peter worked in ’s-Hertogenbosch as a town clerk, later he also became a notary. He married Henricxken van Langel, whose parents were Franco van Langel, town secretary of ’s-Hertogenbosch, and Heylwich van der Rullen. A few days after 25th December 1500 Henricxken died, after having given birth to a child that was born dead. In 1496-97 Peter became a member of the Fraternity of Our Lady and in 1498 he succeeded his father-in-law (who died in 1497) as town secretary of ’s-Hertogenbosch. In 1502/03 Peter married his second wife, Henricxken van der Heze, who bore him 5 children, 2 sons and 3 daughters. Peter died in 1542 as a man of considerable wealth.

The Boston Museum of Fine Arts possesses an Ecce Homo triptych with donors, attributed to the workshop of Jheronimus Bosch. The donor on the left inner wing, who is represented with his patron saint Peter, with his coat of arms and with the insignia of the Fraternity of Our Lady, is Peter van Os. The upper half of the coat of arms (an ox’s head) refers to the Van Os family (os = ox in Dutch), the lower part probably refers to the Wynricx family (Peter’s mother was called Oda Wynricx). The woman on the right inner wing is Peter’s first wife, Henricxken van Langel. The coat of arms refers to the Van Langel en Van der Rullen families. Henricxken is accompanied by St. Catherine, probably because St. Hendrica was unknown. At Henricxken’s feet we see a (dead?) baby. Could Catherina have been the name of this baby?

On the closed wings to the left we see Franco van Langel (with the insignia of the Fraternity of Our Lady) and his sons Wouter, Franco and Jan. Jan was a monk. The accompanying saint is St. John the Evangelist, probably because St. Franco (there is no relation with St. Francis) was unknown. The woman to the right is Franco van Langel’s wife, Heylwich van der Rullen, and her daughters. The one in front, Lysbeth, was a nun. The woman right behind her is Henricxken van Langel again. The accompanying saint is St. Mary Magdalene, probably because she was the patron saint of the monastery in which Lysbeth lived.

It is very likely that we are dealing here with a memorial triptych, commissioned by Peter van Os to commemorate his wife, his dead-born baby and his in-laws. Because Franco van Langel died in 1496-97 and Peter’s first wife died around 1st January 1501, Van Dijck dates the triptych in 1500 (or shortly after, cf. Van Dijck 2001a: 60).

This article is an interesting contribution to the issue of Bosch and his patrons. There are still a few questions, though. Is the lower half of Peter’s coat of arms indeed referring to the Wynricx family? Was the baby at Henricxken’s feet added later?What about the patron saints Catherine, John and Mary Magdalene? Who are the two boys in the background of the left outer wing? And if the baby was added later, can’t the triptych have been commissioned before 1500? On pages 122 and 124 Van Dijck writes that Henricxken van Langel died ‘circa 1st January 1500’ but this is ‘1500 old style’ and should therefore be read as ‘1501 new style’.