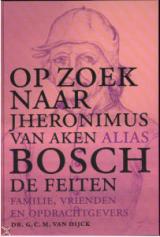 In this scholarly study the Dutch historian Lucas van Dijck brings together all known historical facts about Hieronymus Bosch, his immediate environment and his work, with strong emphasis on the period 1400-1600. In doing so he strongly falls back on older literature about Bosch (compare the respectable bibliography) but also adds some new data which are the result of a thirty-year research in the archival records of (mainly) ‘s-Hertogenbosch and Nijmegen. As the author reports himself his research had not yet been fully completed but the Rotterdam Bosch Exhibition (2001) was a proper incentive to publish the results, for ‘it is better that 90 procent is made public than that 100 procent remains hidden’. No doubt an appropriate decision because Van Dijck’s monograph is a nice addition to the literature about Bosch.

The first chapter deals with Bosch’s family. At the end of the fourteenth century Bosch’s ancestors came from Aachen to Nijmegen and shortly after 1427 his grandfather moved from Nijmegen to ‘s-Hertogenbosch. Hieronymus van Aken (alias Bosch) was born in a family of painters: his great-grandfather, his grandfather, three of his paternal uncles, his father, one of his brothers and two of his nephews were all professional painters. Only a painting by the grandfather has possibly been preserved, in the cathedral of St. John at ‘s-Hertogenbosch. After 1518 the Van Aken family experienced some sort of social and ethical decline (a great-nephew of Bosch was even banned from the duchy of Brabant due to penal acts and another great-nephew also got into trouble). About 1635 the male line of the family ended with Gerard van Aken who – crippled and short of breath – died in an institution for destitute men. According to Van Dijck the history of the ‘s-Hertogenbosch Van Aken family can be summarised by two central concepts: one genius and little prosperity.

New in this chapter is that Aleid, Bosch’s mother, was born out of wedlock (not really something special because in those days children were born out of wedlock in the best of families, as was the case in the family of Bosch’s wife more than once). Van Dijck also signals that three of Bosch’s paternal uncles remained childless. Was this an hereditary illness and is this the reason why Bosch himself also remained childless?

Chapter 2 is about Hieronymus himself. He was probably born around 1450 and he was a cleric (only clerics could become sworn members of the Brotherhood of Our Lady). When he was about 30 years old Hieronymus married Aleid van de Meervenne. This marriage introduced him to a more wealthy and even academic social environment: both Aleid’s brother Godefridus and the husband of Aleid’s sister Geertruid had studied at a university. According to Van Dijck the wealth of Bosch’s wife should not be exaggerated: her financial status was average and Bosch himself never became really rich either, as can be concluded from his estate: he left behind little money. Interesting friends or acquaintances of Bosch were the master builders Alart Duhamel and Jan Heyns, and also the wealthy merchant Lodewijk Beys who lived in Bosch’s immediate neighbourhood (on the Market Square) and travelled to the Holy Land several times. Bosch died in 1516. In that period there was an epidemic of pleurisy in the city and perhaps Bosch was a victim of it.

Somewhat hard to understand is Van Dijck’s emotional plea against the use of the name Jeroen Bosch. The first name Jeroen is mentioned twice in the contemporary archival records and although it is true that the combination Jeroen + Bosch never occurs, it is so common in modern usage that inevitably the author’s voice will be doomed to cry in the wilderness here – as he himself predicts.

Chapter 3 focuses on Bosch’s patrons and collectors. Apparently these belonged to the local Brotherhood of Our Lady and Table of the Holy Spirit [H. Geest-tafel], to the highest nobility and to the wealthy bourgeoisie. Here Van Dijck refers to his own recent research which showed that the Ecce Homo triptych in Boston (a work from Bosch’s studio) was commissioned by Pieter van Os, town clerk [stadssecretaris] of ‘s-Hertogenbosch. An interesting hypothesis is that the Job triptych (Bruges, Groeningemuseum) was commissioned by Jan Pijnappel from ‘s-Hertogenbosch.

The last two chapters deal with the travels Bosch may have undertaken and with the supposed self-portraits. Between 1474 and 1481 there is no trace of Bosch in the local archival records. Perhaps he was staying elsewhere during this period (an apprenticeship abroad?) because in 1474 he contracted a loan together with his father. Another period without any trace in the archives is between 1498 and 1504. Striking here is that on 17th May 1498 Bosch gave a mandate to one Johannes sGreven to deal with his affairs, which could point at a long sojourn abroad. An interesting hypothesis but hard to prove is that Bosch stayed in Italy (and more precisely in Venice) around 1500. As regards the supposed self-portraits: since we have no reliable portrait of Bosch, every statement about supposed self-portraits on Bosch paintings should be considered as pure speculation. Which is why this fifth chapter could have duly been left out: it somewhat spoils the scientific level that is so obviously present in the rest of the book.

The largest (and definitely not least interesting) part of Van Dijck’s monograph consists of a number of appendices which offer a survey of the historical and archival sources up to 1857 mentioning works by Bosch and of the archival sources regarding Bosch and his family: a working instrument that no doubt will often prove to be useful to Bosch researchers in the future. Worthy of consideration are also Van Dijck’s desiderata: further research of archival records (the archives of the dukes of Brabant, of the bishops of Liège, of the family of Mencia de Mendoza and of the cities of Antwerp, Madrid, Prague and Vienna) is absolutely essential and the foundation of a Hieronymus Bosch study center in ‘s-Hertogenbosch would be a blessing.