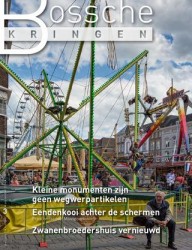 In this article, Van Dijck focuses on the correct name (names) of Jheronimus Bosch. The painter (whose family name was Van Aken) appears 63 times in the ’s-Hertogenbosch archives and 8 times he is referred to by the Christian name ‘Joen’. Christian names were translated in Latin documents around 1500: ‘Joen’ thus became ‘Jheronimus’, a name that appears 53 times in the archives from 1474 on. After 1499 ‘Joen’ doesn’t appear anymore, only ‘Jheronimus’. In the archives, Bosch is also referred to by the Christian name ‘Jeroen’ twice, both times in an account of the Confraternity of Our Lady. Jeroen was a Dutch saint (deceased in 856) and has nothing to do with St Hieronymus, Bosch’s name saint. The Christian name ‘Jeroen’ should be considered an error committed by the Confraternity’s clerk.

Furthermore, it was already known that Katharina, the spouse of Bosch’s brother Goessen and thus his sister-in-law, polychromed a statue of St Barbara in 1499, proving that she was also active as a painter. A document in the ’s-Hertogenbosch municipal archives (dated 17 December 1501) now shows that this Katharina was the daughter of Johannes Priem. From around 1430 until around 1560 the Priem family was a well-known family of painters in the city of ’s-Hertogenbosch.

The complete text of this article is also accessible on JeroenBoschPlaza: http://expert.jeroenboschplaza.com/lucasvandijck/hoe-heette-schilder .