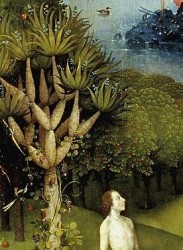 In their introduction to the Bosch Exhibition catalogue (’s-Hertogenbosch, 1967) G. Lemmens and E. Taverne reject the approaches of Wilhelm Fraenger, Lotte Brand Philip, Jacques Combe, Clément Wertheim-Aymès and Andrew Pigler. According to Lemmens and Taverne these approaches have been satisfactorily refuted by Dirk Bax and Leo Van Puyvelde. Bax’s research has indeed demonstrated that Bosch’s polyvalent oeuvre has a moralizing side but Bax’s approach cannot explain the complete content of Bosch’s works. The Dutch professor Brinkman has argued in an article that the ‘alternative’ Bosch approaches can be traced back to a certain tradition in Dutch art.

According to Van Lennep Bosch’s work has been influenced by Tarot and by alchemy. The dragon’s blood tree in the left inner wing of the Garden of Delights triptych was seen by the alchemists as a symbol of the pierre-au-rouge, that is of the alchemical work in its completed state. The palm tree, Adam, the red robe of Christ and the red colour of the fountain of paradise in the same wing carry a similar symbolism.

Van Lennep is convinced that Bosch knew the hermetical philosophy much better than we do, or that he worked for someone who possessed such knowledge.