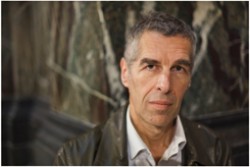 This article bears the typical stamp of the ‘Vandenbroeck touch’: on the one hand, the text excels thanks to the factual knowledge of its widely-read writer but on the other hand, the material is dealt with and structured in such a chaotic way (sometimes meandering along elaborations, generalizing passages and over-zealous footnotes, then again hurrying on across concise, summarizing paragraphs, categorical claims and scanty bibliographic references) that the pleasure of reading, and worse: the understanding of the text is firmly put to the test. When he writes about Patinir, Vandenbroeck tries to put Reindert Falkenburg’s dissertation in the wrong (noteworthy: Falkenburg wrote a very critical review of Vandenbroeck’s dissertation, see Vandenbroeck 1987a). Some crucial passages brought together…

‘The only recent theory, using scholarly arguments, about the meaning of landscape painting in the Netherlands in the early sixteenth century claims that these landscapes were allegorical representations of the pilgrimage of life’ [p. 41].

‘That the imaginary journey through the painted landscape should encourage the spectator to go on a spiritual pilgrimage, which would then be the actual, deeper theme of the paintings, is said to be demonstrated by the composition of the landscape and by the figures in it. But here this theory suffers from over-interpretation’ [p. 41].

‘Some have tried to explain the parts of the landscape with the help of medieval religious, didactic and allegorical literature. But this literature is so extensive that every natural or cultural object can be found in it. As a result, it is not very difficult to interpret any detail of a fifteenth- or sixteenth-century painting by means of such a system. Meanwhile, this way of interpreting has been expanded to seventeenth-century landscape painting’ [p. 41].

‘There is not enough ground for a systematical interpretation of the artistic genre of landscape painting that began to flourish in the Netherlands with Patinir, as coded allegories of the pilgrimage of life. This does not mean that these landscapes are meaningless’ [p. 47].

When writing about the pilgrimage of life motif Vandenbroeck also briefly mentions Bosch’s Pedlar paintings (Madrid / Rotterdam). Here Vandenbroeck agrees with De Bruyn 2001a (see the reference in footnote 75): ‘That (…) the pilgrimage of life motif can be found in the art of Bosch and could have inspired Patinir, is correct. Then again, there is only one Bosch composition in which this is the central theme: the Pedlar (Rotterdam ; Madrid). This figure is definitely not a pilgrim, but illustrates the idea of repentance at a certain moment of the ‘journey of life’: the threats, the confrontation with the near end, and remorse after a life of dubious nature’ [p. 42].

Some other aspects of this contribution are also remarkable. The Garden of Delights triptych is dated circa 1480? (in the wake of Bernard Vermet’s Rotterdam 2001 hypothesis, but indeed with question mark). About Bosch’s method we read…

‘The distinction boils down to the following: the humanists explain their theory with the help of texts (and sometimes also of images), the artists express a similar preoccupation in their art, by means of a ‘way of inversion’. Hieronymus Bosch used the same method’ [p. 37].

‘The religious subjects [in the art of Patinir] visualize a view of man and world. This vision partially concurs with the world view of Hieronymus Bosch – whose hell and hermits iconography can also be found with Patinir – and partially it agrees with the mainstream of contemporary art (Mary and Child), partially with the intentions of a new generation of humanists. (…) Patinir’s humanist connections can also be seen in his Styx (Museo Nacional del Prado, Madrid). The underworld river separates paradise, painted in a Christian but not very orthodox way, from classical Hades (meant to be hell), guarded by Cerberus’ [p. 40].