Felipe de Guevara and his Commentary on Painting and Ancient Painters 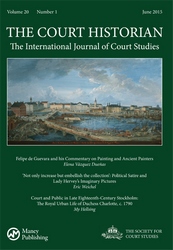 Felipe de Guevara was one of the courtiers and intellectuals that surrounded Philip II, king of Spain. He was born in Brussels circa 1500 as an illigitimate son of Diego de Guevara. On 13th March 1535 he married Beatriz de Haro and established his household in Madrid, where he lived for the rest of his life, except for a period spent in Flanders in 1540. In the last years of his life he wrote the first treatise on painting in Spain, Comentario de la Pintura y Pintores Antiguos. Guevara is primarily being known for his discussion of the work of Hieronymus Bosch today but his treatise also comprises valuable contemporary testimonies of sixteenth-century Spanish artistic culture and of the prevailing artistic taste at the court of Philip II.

Felipe’s father, Diego de Guevara (+1520), was an important ambassador who served under Philip the Fair, Margaret of Austria and later Charles V. He also had an interest in art as a patron: he owned Van Eyck’s Arnolfini Portrait and must undoubtedly have owned works by Bosch. It is likely that his father’s elevated status brought Felipe many benefits but no documents have been found that give details of his first period in Brussels. Perhaps he was in the service of Margaret of Austria (+1530) in Mechelen and subsequently of Mary of Hungary (+1558) in Brussels. A supposed portrait of Felipe by Jan Vermeijen, dated 1531, could be a further indication of this.

Felipe probably inherited many paintings from his father but it is very likely that he also acquired further works during the course of his life to enrich his collection. From an archival document (16th January 1570) we know that Philip II bought a number of possessions belonging to the then widow of Felipe and to their son Ladrón, among them paintings by Bosch (i.a. a Haywain and a Cure of Folly) and by Patinir. Felipe de Guevara was an important collector of paintings and as a result, his Comentario is addressed not only to Spanish artists (with the aim to enhance their training through a better understanding of classical precedents), but also to the court’s aficionados or scholarly spectators, who were keen art collectors. Felipe sought to refine their judgement or way of seeing, and this is the most novel aspect of the treatise.

Felipe did not achieve a political position of the same standing as his father. Instead he devoted his time to humanistic studies and became an enthusiastic dilettante scholar of classical antiquity. He was also an antiquarian, a collector of ancient coins and a numismatist. His antiquarian interests most probably began when his firstborn son Diego began to study at the University of Alcalá de Henares at the academy that the scholar Ambrosio de Morales had founded in his own house for students from privileged families. Morales taught Diego poetry, grammar and eloquence and considered him a precocious student. Unfortunately Diego jr. already died at the age of 28 (in 1565, two years after his father). Around 1560 Felipe wrote a numismatic treatise (in Latin) that was considered lost until it was rediscovered in the collections of the University of Copenhagen in 1909. Felipe’s treatise on painting stands testimony to the notion that his principal aspiration was to become one of Philip II’s cultural advisers. But none of his works were published during his own life, which suggests that he did not manage to achieve this level of royal recognition.

As a collector of Bosch paintings and as a sixteenth-century writer on Bosch Felipe de Guevara largely deserves the attention of Bosch scholars, not in the least because his father Diego may have had close contacts with the painter. Ambrosio de Morales, the tutor of Felipe’s son Diego, wrote a (very early and very interesting) comment on the Haywain triptych.