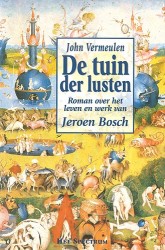 It was probably inevitable. In the mid-sixties, when the late-medieval painter Hieronymus Bosch was the center of attention (thanks to the important ’s-Hertogenbosch exhibition in 1967), a number of historical novels about the artist were published, among them Moergrobben by Theun de Vries and Felicia by Armand Boni. 2001 was another Hieronymus Bosch year, with exhibitions and a congress in Rotterdam and ’s-Hertogenbosch and in the spring of that year De Tuin der Lusten [The Garden of Delights] by the Flemish author John Vermeulen was published, as the subtitle announces: a novel about the life and work of Hieronymus Bosch. Coincidence or calculation? Hard to say (but probably the last) and perhaps this is not so important.

Everyone who is familiar with the art of Bosch is guaranteed to become suspicious when he is confronted with a new historical novel about the painter because we know very little about his life and the modern interpretations of his often bizarre oeuvre tend to diverge widely. This offers the author of a romanced biography the opportunity to give free rein to his fantasy and John Vermeulen has definitely taken that opportunity. In his novel Hieronymus Bosch has an incestuous relationship with his unconventional sister who is accused of witchcraft, he creates his paintings under the influence of drugs, he is on good terms with an alchemist, is a member of a heretical sect devoted to free love and nudism, and he collides with the Dominican inquisitor Jacob Sprenger (one of the authors of the famous Witches’ Hammer).

Someone of ill will could point out that Vermeulen has obviously read the wrong books about Bosch when he prepared his novel (such as the texts of Wilhelm Fraenger and the book by Lynda Harris from 1995), because when he sporadically suggests interpretations of Bosch paintings that really exist, the result is rather mediocre. From a sheer historical point of view it has to be stressed that the reader should not expect reliable information about the real Bosch from this book. On the other hand this does not seem a compelling argument to mercilessly refer the novel to the dustbin.

Vermeulen writes fiction, not an art-historical essay, and who could prevent him from cutting loose his imagination when it comes down to an intriguing personality such as Bosch? Furthermore it cannot be denied that the author possesses a fair amount of literary skills: his style is fluent, his way of evoking certain situations is accurate and attractive (for instance the city fire in the first chapter) and by means of lively dialogues and interior monologues he adds a deeper meaning for the alert reader (the intelligent, introverted Bosch who does not feel at ease in the foolish society of men captured by religious fanaticism and superstition and who is longing for a better, paradisiacal world in which everybody is nice for his fellow-man). If you are not looking for some sort of historical truth, you are bound to enjoy reading this novel of almost 400 pages. One question remains, though: would John Vermeulen know that the German author F.M. Huebner once wrote a historical novel about Bosch that was also called The Garden of Delights?