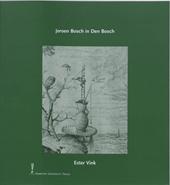 Ester Vink is a Dutch historian who has done archival research about Bosch as part of the Bosch exhibitions in Rotterdam and ’s-Hertogenbosch in 2001. The archival sources she has looked into mainly consist of accounts and archives from ’s-Hertogenbosch for the period 1460-1550 (on pages 119-123 a detailed survey of those sources). In the introduction Vink immediately admits her research has not yielded any sensational results: the archival sources give no information about the ideas behind Bosch’s paintings or about the way in which his contemporaries viewed his work. What this book does deal with is the broad ’s-Hertogenbosch context of the painter and more particularly his cultural, social and familial environment.

In a short first chapter Vink tells something more about ’s-Hertogenbosch around 1500. Back then ’s-Hertogenbosch was not an important, but a lively and prosperous town, with a thriving business life that had a stimulating influence on the cultural life [p. 9]: for the ’s-Hertogenbosch artists the religious institutions (especially the St. John’s) were important patrons [p. 11]. At the end of the fifteenth century the wars with Guelderland caused serious financial losses and this was particularly troublesome for the poorer social classes. During his lifetime Bosch must have witnessed the consequences of these wars and the social tensions resulting from them [p. 10].

Then follows a long (and also very long-winded) chapter about the artists in ’s-Hertogenbosch. Bosch’s spouse, Aleid van de Meervenne, was raised in a well-to-do family with quite a lot of landownership and a high income. Most of his colleagues were not so lucky: within the group of ’s-Hertogenbosch artists Hieronymus apparently belonged to the upper layer in this respect [p. 24]. Bosch was also a sworn member of the Fraternity of Our Lady, which mainly consisted of clergy and members of eminent ’s-Hertogenbosch families around 1500. Bosch, the architect Jan Heyns and the organ-player (and clergyman) Jan die Gruyter were more or less the only ‘artists’ who had become a sworn member [p. 25]. After 1525 only aristocrats could become a sworn member [p. 26]. Hieronymus lived in a house at the northern side of the Market Square (today: Markt 61), named Inden Salvatoer (In The Saviour). This neighbourhood was considered fashionable. Hieronymus’ house had a crenellated front that was higher than the house itself, which made the house look bigger than it really was. Today only the side-walls and the cellars below the front and the back part of the house have been preserved. At the eastside of the Market (today: Markt 29) Hieronymus’ parents, brothers and a nephew lived in a stone house, bought by father Anthony in 1462 (in a sixteenth-century source the house is called ‘Sint Thoenis’ (St. Anthony) [pp. 28-29].

From the zettingen (taxes that had to be paid when the city needed money) we can conclude that Bosch had to pay a lot more than was customary for artists (only the architect Jan Heyns had to pay more), but generally speaking Bosch was to be situated on the same level as the average ’s-Hertogenbosch dignitary or well-to-do craftsman. According to Vink Bosch did definitely not belong to the top layer of the ’s-Hertogenbosch society [p. 34]! Many had to pay more taxes than he did. On the other hand Bosch had to pay more cijnsen (annual taxes for real estate) than Jan Heyns [p. 38]. The commissions that are mentioned in the accounts show that Bosch did not become rich with what he did for the ’s-Hertogenbosch institutions. The amounts of money that were paid to him by the Fraternity of Our Lady in the years after 1510 were definitely not high (but perhaps he charged the minimum rate) [p. 57]. Then again: the Fraternity’s accounts book for money from a special chest that was spent on the larger works of art has disappeared! [pp. 59-60]

The third (and also rather dry) chapter specifically deals with the painters in ’s-Hertogenbosch: the sources mention about 35 painters who worked for patrons in ’s-Hertogenbosch (see the list on pages 62-64, with – among others – Hieronymus’ grandfather Jan, his father Anthonis, his uncle Goessen, his brother Goessen, his nephew Anthonis and also Gielis Panhedel, probably a follower of Bosch). Hieronymus’ nephew Anthonis and his nephew Jan de Beeltsnyder were sons of Hieronymus’ uncle, Goessen den Maelder (Goessen the Painter) [p. 83]. Vink has not found much information about painters’ workshops. A certain Amant die Maelre (Amant the Painter) had an apprentice, and Hieronymus had assistents (as can be concluded from an account of the Fraternity of Our Lady from 1503/04, the so-called knechtendocument, the assistents document). Probably Bosch’s workshop was largely a family business [pp. 78-79].

The fourth and final chapter is about Hieronymus Bosch himself. First Vink deals with Bosch’s first name (in the sources: Jeronimus, Jheronimus, Joen, Jonen and Jeroen, this latter name never combined with ‘Bosch’, though), with his surname (Van Aken) and his stage name Bosch, which appears only once in the accounts (1509/10: Jheronimus van Aken, schilder ofte maelder die hem selver scrift Jheronimus Bosch = Jheronimus van Aken, painter who writes himself Jheronimus Bosch) [pp. 87-89]. It is supposed that Bosch was born around 1450: in 1481 he appears for the first time as an independent person in an aldermen’s act and in the same year he seems to be the husband of Aleid van de Meervenne. Already in 1474 Hieronymus’ name pops up twice in aldermen’s documents, but together with his father and his brothers. If Bosch was born around 1450, the Market 29 address cannot be his house of birth because father Van Aken only bought this house in 1462 [pp. 89-90].

A survey of Bosch’s activities in ’s-Hertogenbosch:

The following is an important argument against the opinion of some scholars that Bosch’s triptychs can never have adorned the altar in a church or chapel: the altarpieces Bosch painted for the St. John’s, have been on display there for more than a century. Only around 1615 the Church began to be disturbed by the figures Bosch had painted. The large number of nudes were found indecent and this is why the city of ’s-Hertogenbosch could purchase the wings of the high altar in 1617. Apparantly they were not judged to be offensive by the city council [p. 102, see also Gerlach 1988: 59/60].

Vink concludes that Bosch’s most important patron (inside ’s-Hertogenbosch) was the Fraternity of Our Lady [p. 116] and that he spent the larger part of his active life in his city of birth, apart from some possible periods of absence [p. 116].

All in all Vink has not come up with new information. All the data about Bosch she mentions here were already known from elsewhere. In her book everything is nicely put together, though, and supplemented with a series of archival data, although for the larger part these are less interesting, at least as far as Bosch’s life and works are concerned.