The foreground of Bosch's 'Death and the miser' 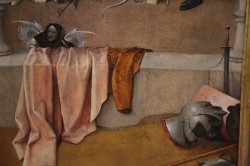 De Tolnay has already observed that the dying man’s fate in Bosch’s Washington Death and the miser panel is not yet determined, as opposed to the Ars moriendi woodcuts in which the angel always triumphs over the devil. In Bosch’s representation responsibility rests with the dying man himself, whose gestures express conflicting emotions (his left arm reaches for a crucifix, his right arm for a purse).

The foreground of the panel, with the red cloak hanging over a wall and the assembly of armour and weapons have not been explained so far in a satisfactory way. These objects can be related to Saint Paul’s Letter to the Ephesians 6: 10-17, in which the Christians are called upon to wear spiritual armour. In the Middle Ages a literary tradition existed that could directly or indirectly be traced back to this passage and always deals with spiritual armour. This topos also regularly occurs in medieval iconography, for instance in a thirteenth-century miniature and in Dürer’s 1513 Knight, Death and Devil engraving.

Vinken and Schlüter date the Washington panel circa 1509 and suggest to interpret the armour in the foreground as the weapons of the miles christianus, inspired by Saint Paul’s letter and probably also by Erasmus’ Enchiridion militis christiani (written in 1501 and printed for the first time in 1503). They relate (in a not very convincing way) the black winged manikin leaning on the wall to a passage in the Sterfboec (1488): the manikin is supposed to represent the dying man’s damned soul.