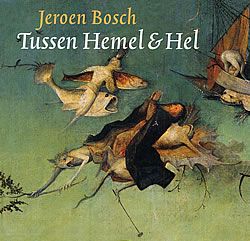 Chris Will (°1953) is an art historian who works for the Rotterdam Museum Boijmans Van Beuningen. This book, aiming at the general reader and mainly consisting of a number of colour illustrations of details in Bosch’s paintings with explanatory text, was published in the margin of the Rotterdam Bosch Exhibition (1st September – 11th November 2001). It offers no new insights and does not break fresh ground, but is based on the scholarship of Dirk Bax, Walter Gibson, Jos Koldeweij, Roger Marijnissen, Paul Vandenbroeck and many others, as is mentioned rather offhandedly in the bibliography.

The Bosch Exhibition catalogue delivers the idea of a successful family workshop centering around the genius of Hieronymus Bosch, who worked together with his father, his brothers and some of his nephews. This could very well explain the stylistic and iconographic divergences within the Bosch oeuvre [p. 10]. Will further characterizes Bosch as a moralizing artist who made use of Christian imagery and who was familiar with the religious ideas of the late-medieval bourgeoisie to which he belonged [p. 8].

Bosch’s subject matter determines the book’s structure, which consists of three parts. First the Creation and the origin of Evil in the world are dealt with, next we learn more about the way Bosch depicted the earthly vanities and man’s sins, at the same time pointing out the good example of the saints who taught there is hope of salvation for the faithful, and finally the author focuses on the hereafter with the so-called Four Last Things (Death, Last Judgment, Heaven and Hell). One of the consequences of this arrangement is the author’s frequent jumping from one painting to another within the Bosch oeuvre, which is bound to make a confusing impression on the non-specialized reader. The same is true for the rather arbitrary digressions that are strewn across the text (for example about the unicorn and the giraffe in the left interior panel of the Garden of Delights).

More interesting are the passages in which the author offers iconographic interpretations of some details of the Bosch paintings (immediately illustrated in colour), as is for example the case with the ‘scorpion-fish’ and the ‘landscape-man’ in the interior panels of the Lisbon St. Anthony triptych. It has to be mentioned, though, that Will does nothing but echo other authors (without referring to them in footnotes) and that such detailed explanations are limited to a small selection. On the other hand: the information given is very reliable in most cases and only rarely can the author be blamed for a sloppy comment. For example: it would be interesting to learn where exactly in fifteenth-century Middle Dutch literature a haywain appears in an allegorical or symbolical way… [compare p. 71].

As a whole this popularizing publication offers an acceptable general inroduction to the works of Bosch, although inevitably its tone remains superficial. Undoubtedly there are other and still nicer booklets about Bosch available than this one. Probably it are mainly young readers who can benefit from this concise edition.