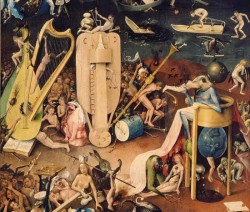 After a general description of the musical practice in the fifteenth and early sixteenth century Zilverschoon focuses on some musical details in three Bosch paintings. In the central panel of the Prado Adoration of the Magi triptych one of the shephers lying on the roof of the stable holds a bagpipe. Here this bagpipe is not a sexual symbol but the attribute of a musical shepherd. In the left interior panel of the same triptych a bagpipe player accompanies two dancing couples. This is probably a realistic detail: because of its loud sound the bagpipe is very suitable for dances in the open air.

In the central panel of the Prado Haywain triptych a nun offers a sausage to a bagpipe player. The sausage and the bagpipe refer to the sex the nun is longing for and thus to the transitory and sinful earthly vanities. The music-making people on top of the haywain are rich burghers or noblemen who are under the influence of the devil. In the right interior panel of the Prado Garden of Delights we see some bells with a person functioning as a clapper. Maybe these human clappers are preachers who have abused the name of God. Lower in the same panel we see a number of giant instruments: harp, lute and hurdy-gurdy are painted next to each other and refer to musicians of different social classes (choristers, beggars…). In this detail music is the cause of sinful behaviour.

In his paintings Bosch does not seem to apply a social hierarchy when he deals with people and musical instruments: noblemen, choristers, preachers, entertainers and beggars are treated in the same way. The meaning of a musical instrument in the work of Bosch is not definite from the start, it is always defined by the context in which the musical instrument is depicted.

This article leaves a superficial and weak impression. This is probably caused by the fact that it is the adaptation of a master thesis.Therefore, in order to pass a well-founded judgment on Zilverschoon’s insights, it is necessary to read this master thesis.