Bosch - The Garden of Earthly Delights 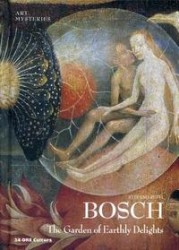 Another booklet for the general public about Bosch’s Garden of Earthly Delights triptych written by the Italian art historian Stefano Zuffi (°1961). The monograph, which is part of a series called Art Mysteries, is very superficial and does not solve any mysteries at all. From the scarce facts we know about Bosch’s life we can tell that he – famous as ‘the demonic creator of fantastical scenes’ – lived ‘in a comfortable, sleepy microcosm, on the fringes of history’ [p. 21], the only real adventure in his life possibly (there is no documentary proof) being a trip to Italy between 1500 and 1503. Bosch drew on many ‘high’ literary sources but also on visual ones. ‘Mysticism and fear, spiritual tension and superstition, country proverbs and learned reading were inextricably interwoven’ [p. 24].

The dates proposed by scholars for the execution of the Garden triptych vary between 1480 and 1505 [p. 7] but the captions that go with the illustrations seem to suggest that Zuffi himself places the painting between 1500 and 1505. No account is given for this. The only original point of view offered in these pages is that is not unlikely that Bosch was influenced by the first accounts about the discovery of America, in particular about Brazil. In April 1500 Pedro Álvarez Cabral landed there and one of his officers sent King Manuel I of Portugal a twenty-seven page missive giving a detailed description of the new land. A belief spread through Europe that Cabral had reached the Earthly Paradise. The central panel of Bosch’s tryptich seems to depict an exotic country, a ‘new world’ [pp. 27-29].

The closed wings show the Third Day of Creation. The serenity of the Earthly Paradise in the left interior wing is not as real as it seems: Evil shows itself even here. The principal theme of the central panel is unquestionably free love, celebrated by countless naked men and women but its moral significance is still under debate. Zuffi seems to to think Bosch painted the capital sin of lust because according to him the couple in the bubble refers to the Flemish proverb ‘happiness is like a glass, it soon breaks’ [p. 62]. Then again, when he writes about a landscape in the background, he states: ‘(Bosch’s) painting teaches us to enjoy these moments, to love the world for what it is, without letting ourselves get carried away by a craving for earthly goods that ruin our lives and lead us to perdition’ [p. 56]. This perdition is shown in the right interior wing.

Most of the time Zuffi limits himself to iconographic descriptions without interpreting or explaining anything at all. How little he really understands Bosch is proven by what he says about the knight in armour with a gold chalice in the right interior wing (obviously a military man being punished for church robbery): ‘An allusion to Hussite heresy’ (admittedly with question mark) [p. 76]. Some further minor errors: the title The Garden of Earthly Delights appears in Spanish inventories from the seventeenth century on [p. 6], the second verse at the top of the closed wings is quoted as ‘ipse mandavit et facta sunt’ (should be: creata sunt) [p. 9], Bosch married Aleyt van der Meervenne in 1480 (1481!) [p. 94] and Philip the Handsome ordered a Last Judgment triptych from Bosch in 1503 (1504!) [p. 95]. The book has no footnotes and a bibliography is absent. Some good colour photos of details but they clearly date from before the most recent restoration. Obviously no compulsory reading, this little book.