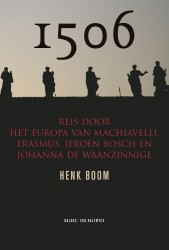 In this book the journalist Henk Boom wants to give the reader a picture of the year 1506, which is situated ‘in the exact centre of the transition period from Middle Ages to more modern times’ [p. 9]. In order to do this he lets his alter ego, the fictitious chronicler Hendrick Vandenzavel, travel from Rome to ’s-Hertogenbosch in 1506, meeting famous persons on his way. The sixteenth chapter deals with Hieronymus Bosch. The architect Alart Duhameel tells us that Bosch was an introverted person and one of Bosch’s workshop assistants comments on a triptych, The Creation of the World, which can be seen above the altar in the ’s-Hertogenbosch St John’s (a footnote explains that this triptych has been lost but that Bosch made a copy of it that we now know as The Garden of Delights).

Later Vandenzavel pays a visit to Bosch’s workshop and the next day he has a conversation with the master himself, who is wearing a funnel on his head for some reason or other. Bosch tells that his paintings are inspired by the Modern Devotion, that his triptychs are intended to warn sinners and that he further wants to be left alone. Obviously, this popularizing text is very superficial and unreliable. This is, for instance, proven by the fact that more than once the author is talking about Bosch’s canvases (Bosch painted on panels). On page 241 Boom signals an archangel whose sword is piercing a blindfolded man in the right interior panel of the Garden of Delights. An archangel in hell!