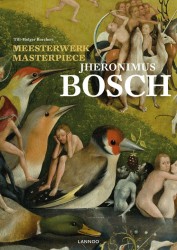 This modest publication recycles the chapter dealing with Bosch from Till-Holger Borchert’s Masterpiece from Van Eyck till Rubens in detail (see Borchert 2013), apparently because 2016 is a year dedicated to Bosch. The text (Dutch and English) and illustrations are about three Bosch triptychs (The Adoration of the Magi, The Garden of Delights and The Haywain, all three of them: Prado, Madrid) and are largely the same as in 2013, apart from some slight differences (for example the painter’s name: Hieronymus Bosch in 2013, Jheronimus Bosch in 2016).

There has been one major change, though. In 2013 Borchert agreed with Koreny 2012 by attributing the Haywain triptych to a left-handed, very talented follower of Bosch [Borchert 2013: 274]. This new version suddenly claims that ‘thorough technical examination’ (probably referring to the BRCP project) has shown that the Haywain was ‘most likely’ painted by Bosch himself [p. 34]. Very odd: someone (the author himself or an editor?) has forgotten to adapt the rest of the text in this respect. There we still read that the Haywain differs fundamentally from Bosch’s autograph works [p. 39] and that the painter of the Haywain clearly studied the landscapes of Joachim Patinir [p. 40].

It is not the only carelessness that somewhat mars this nicely-illustrated publication. On page 3 we read that Bosch hosted a number of banquets for ‘the confraternity’, as if everybody is supposed to know what confraternity is referred to here. If we consult the original 2013 text we learn that the preceding paragraph (indeed dealing with the Confraternity of Our Lady) has been dropped in 2016, which is why the allusion to ‘the confraternity’ comes out of the blue.