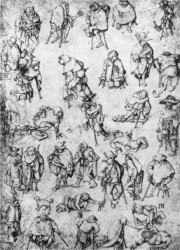 Based on examples by Bosch or at any rate in the style of Bosch one of his imitators drew a sketch with 31 crippled beggars (Vienna, Albertina, inv. 7798) around 1530-40. In the middle of the sixteenth century the Antwerp editor Hieronymus Cock published a printed version of this page in copper. The authors of this article are specialised in muscular and skeletal diseases (one rheumatologist, one orthopedist and one neurologist), all being associated to the Academic Hospitals of the Catholic University of Louvain. For each of the 31 ‘patients’ in the drawing they suggest a diagnosis. These diagnoses confirm that neither lepra nor syphilis were the primary causes of lameness in the middle ages. A large variety of diseases and causes of lameness could be recognized. Amputations of the lower limbs because of dry gangreen, caused by ergotism or by infected traumatical wounds, were most prevalent, apart from congenital lameness and growing disorders.

About ergotism and the related ‘St. Anthony’s fire’ we learn the following: ‘Ergotism was epidemical in medieval Europe and it remained so until 1816. This intoxication was caused by a mold, the fungus claviceps purpurea, which contaminated the bread flour. Mainly the poor population suffered in large numbers from ergotism resulting in lameness. This intoxication causes spasms of the blood vessels leading i.a. to the mortification of tissue (dry grangreen) in the extremities of limbs, fingers, toes and lower legs. The spasms are accompanied by severe pain, often called St. Anthony’s fire’ [pp. 149-150].

In 4 of the 31 cases the authors suspect a beggar to simulate lameness. The wearing of a fox’s tail is thought to be an iconographical indication of this. The authors see the fool-beggar (at the top left), one of these four malingerers, as the leader of the ‘procession’ of beggars (as the beggars in the drawing and in the print remind the authors of the processions of lepers, wandering around every year on the Monday and Tuesday after the feast of Epiphany in order to collect money for the lepers’ hospital). This fool-beggar is also wearing a fox’s tail and in medieval drawings and paintings this object is said to refer to hypocrisy. The dating of the drawing is based on Koreny/Pokorny 2001.

The diagnoses put forward here are of interest to palaeopathologists (studying the diseases of the past), but less important for iconologists (who are incapable of judging about the scientific correctness of thése diagnoses anyway, only the authors’ colleagues can do that). That the fool-beggar at the top left would be the leader of the ‘procession of cripples’ seems a bit far-fetched as we don’t really see a procession, but rather a sketch with figures put next to and on top of each other at random. It is remarkable, though, that the authors identify 4 of the 31 beggars as malingerers. In the copper engraving edited by Hieronymus Cock a subscription clearly makes the beggars appear in an unfavourable light. It is not very logical then that only 4 of the 31 figures would be represented as malingerers. This low number does not agree with the message that the print and the drawing seem to carry.