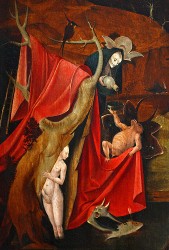 The growth of texts about witchcraft in the fifteenth century has to be seen against the background of the rising influence of middle-class morals. The power of women in the field of sexuality, procreation and education was seen as a threat in times when the need for social rules and moral control in this context was increasing. On this basis a certain plausibility was ascribed to the fact that the devil bonded mainly with women in his apocalyptic battle.

In the Malleus Maleficarum, the most important work in the struggle against witch and devil in the fifteenth century, St. Anthony is presented as the great example of invulnerability and resistance against Satan more than once. Because Jacob Sprenger (the most influential author of the Malleus) was not unknown in ’s-Hertogenbosch, it seems interesting to study Hieronymus Bosch’s St. Anthony triptych (Lisbon) in the light of this famous book about (and against) witches.

Only at the end of the fifteenth century (after the Malleus had been published) Bosch’s diabolical creatures lose their traditional character: the elaborate treatment of diabolical illusions and demonic phantoms could very well be the cause of this. On the left inner wing the fact that Anthony was assaulted by devils leads to criticism on the corruption and decline of the contemporary clergy. The same is the case in the Malleus, be it only in a short passage. On the right inner wing the naked woman in the hollow tree and the flying fish which is carrying a man and a woman, refer to the teachings about witches. And the way in which Anthony is represented on the central panel matches his exemplary function as described in the Malleus: the saint doesn’t take any notice of the demons in his immediate neighbourhood.

The intellectual climate in which Bosch painted, was a climate of awareness of sin, fear of the devil and doom-mongering. In this context Anthony was a signal of potential salvation and escape from the claws of the devil and his companions.