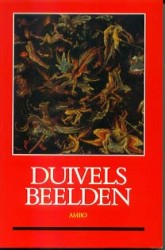 According to Bax (1949) Bosch’s devils can be understood by making use of the Dutch language. Furthermore his devils represent the vices (especially those of the lower classes) that Bosch could observe in his own times. But Bax rejected any link with the persecution of witches, which was on the rise during Bosch’s life. According to Dresen-Coenders Bax was right to a certain degree. Bosch’s devils do indeed represent contemporary vices but Bax’s interpretations fall short because he does not take into account the new ideas about witchcraft around 1500. An example is the toad that has been depicted together with an old and naked woman in the right wing of the Lisbon St. Anthony triptych: according to Bax the toad only refers to unchastity but Dresen-Coenders sees it as the devil who shows up here as the partner of old and young witches.

Very likely Bosch was aware of the new ideas about witchcraft around 1500: Jacob Sprenger (co-author of the Malleus Maleficarum) had the ‘s-Hertogenbosch Dominican monastery besieged with the help of Maximilian of Austria in 1483, because the monks resisted the reformations Sprenger was advocating. In this contribution Dresen-Coenders’ purport is to show that Bosch’s demonological repertoire was influenced by the new ideas about witchcraft as they were expressed in Latin demonological literature (especially in the 1487 Malleus Maleficarum) and in older sources (Cassian, Augustine) to which this literature can be traced back. She will do this by means of the Lisbon St. Anthony triptych and the Vienna Last Judgment triptych and she will also try to interpret the Rotterdam Flood panels.

Around 1500 St. Anthony was very popular. This can be linked to the growing fear of devils: St. Anthony protected against demons and he himself had proven to be untouchable for their wiles. The popularity of St. Anthony is proven by the numerous copies of Bosch’s Lisbon triptych and by all the other depictions of this theme by fifteenth- and sixteenth-century artists. Written sources were Athanasius’ Vita (Life) of Anthony, the Golden Legend (which was translated in Middle Dutch) and the Vaderboek (Book of Fathers).

Johannes Nider’s Formicarius (1437) and the Malleus Maleficarum mention a further unknown episode from the life of St. Anthony, the source of which is Cassian’s Collationes (around 400): this episode tells about a quarrel between Anthony and two pagan philosophers who badger the saint by sending demons to him. But there was a problem: Cassian denies the idea that devils could copulate with women and this idea was pivotal in the new fifteenth-century approach of witches. St. Augustine’s authority was called in in order to correct Cassian.

Two of Cassian’s works, the Instituta Coenobiorum and the Collationes Patrum (written for monks in the south of Gaul between 420 and 426) exerted a lot of influence on medieval monasticism and also on fifteenth-century circles of the Modern Devotion. In 1476 the Brethren of the Common Life published a complete Latin edition of the Collationes. Earlier in the fifteenth century Dionysius the Carthusian already wrote a version in simple Latin that was also printed in the sixteenth century. Two Middle Dutch translations of the Collationes are known: one from the southern Netherlands (1360) that was not wide-spread, and one from the northern Netherlands (early fifteenth century?) from circles of the Modern Devotion. This latter translation was also printed as Der ouder vader collaciën (Antwerp, Michiel van Hoochstraten, 1506). In the fifteenth century there was also a lot of attention for Augustine’s De civitate Dei (illuminated manuscripts, printed books).

For Cassian sexuality was not the most important vice. But for Augustine it was: according to him sexuality was the cause of the Fall of Man and of the Original Sin. The Formicarius and the Malleus refer more often to Augustine and to Thomas Aquinas than to Cassian. In these two texts Cassian’s opinion (sexual intercourse between women and incubi is not possible) is rejected with the help of Augustine (an incubus can collect human sperm as the succubus of a man and then ejaculate it into a woman). Both the Formicarius and the Malleus contain a doctrine about witchcraft. The main difference is: voluntary sexual intercourse with the devil as the confirmation of a diabolical pact is not yet mentioned in the Formicarius. According to Augustine magic is always accompanied by a pact with demons. Thomas Aquinas distinguished an implicit and an explicit pact. Old legends sometimes mention a written pact. According to the Malleus there are more women than men who conclude a pact with the devil. The treaty between devil and witch reminds of the celebration of a marriage. In this context an evil part is being played by old women as procuresses.

Dresen-Coenders then analyses the traces of Cassian in the works of Bosch. Cassian had two talks with the abbot Serenus: in these talks there are a lot of expressive statements about demons, it is said that every demon has his own ‘specialty’, his own vice. This agrees with the opinion of Bax that Bosch’s devils are representations of contemporary vices. Serenus also tells about the vision of a monk who saw a diabolical ‘prince’ conduct an examination of conscience with a number of demons (the question being: have the demons done their diabolical job well). This would agree with the infernal administration of justice in the foreground of the right inner wing of the Vienna Last Judgment.

These so-called ‘traces’ can only be called weak and little convincing.

Traces of the doctrine about witchcraft in the Lisbon St. Anthony triptych

It seems obvious that in Bosch’s St. Anthony triptych references to witches and devils can be found. But whoever tries to interpret the various details in such a little convincing, arbitrary and superficial way as is the case here, is bound to lose the right track. Dresen-Coender’s arguments don’t convince the reader of the thesis that Bosch specifically consulted the Malleus Maleficarum. Which of course does not automatically mean that the Malleus was not one of Bosch’s sources. The possible link between Bosch and the Malleus definitely deserves further research.

According to Dresen-Coenders the central panel does not depict the Last Judgment itself, but rather its annunciation, more specifically the final battle that precedes the Last Judgment (as described in book XX of Augustine’s De civitate Dei.

Perhaps this is the Last Judgment that was commissioned by Philip the Fair in 1504. He must have been familiar with the doctrine about witches, because he was educated by a colleague and assistant of Sprenger, namely Michel de Lille. This hypothesis, as presented here, sounds very little convincing.

The so-called Flood panels in Rotterdam

A passage in Cassian (with observations by the abbot Serenus) teaches us that magic already existed before the Flood, as a result of the sexual intermingling of Seth’s offspring with Cain’s offspring and with devils. Cham (son of Noah) engraved that knowledge in metal plates and stones so that they could survive the Flood and after the Flood he looked for them again. In the foreground of the left inner wing we see a mannikin with something in his lap: this could well be Cham. At the bottom of the right inner wing (depicting the situation after the Flood) we see a mannikin that looks like the other mannikin: is this Cham who is looking for the metal and stone plates?

On the backside of the wings (the closed wings) Bosch painted allusions at the magic of demons.

The four tondos form a unit: they show the possibility of salvation by Christ, in spite of all the devil’s wiles. There is also a relation with the inner wings: according to Augustine the Flood refers to the Last Judgment, Noah’s Ark refers to the Church and Noah’s salvation refers to the faithful and good. In the way they are presented here, these interpretations are not really convincing. The matter needs further iconographical research.

Did the lost central panel (Dresen-Coenders erroneously speaks of a ‘central wing’) depict the sins of Bosch’s own times or of the Last Days with a lot of ‘modern’ witches, and is that the reason why it got lost? Until the nineteenth century the wings were in Spain, where the belief in witchcraft disappeared earlier. This is not very likely. The bad conservational shape of the wings is more likely due to a fire or some other sort of damage.

Dresen-Coenders' text is highly interesting because of the information it gives about fifteenth-century demonological literature. But as soon as she starts to analyse Bosch’s paintings, she does not sound convincing at all.